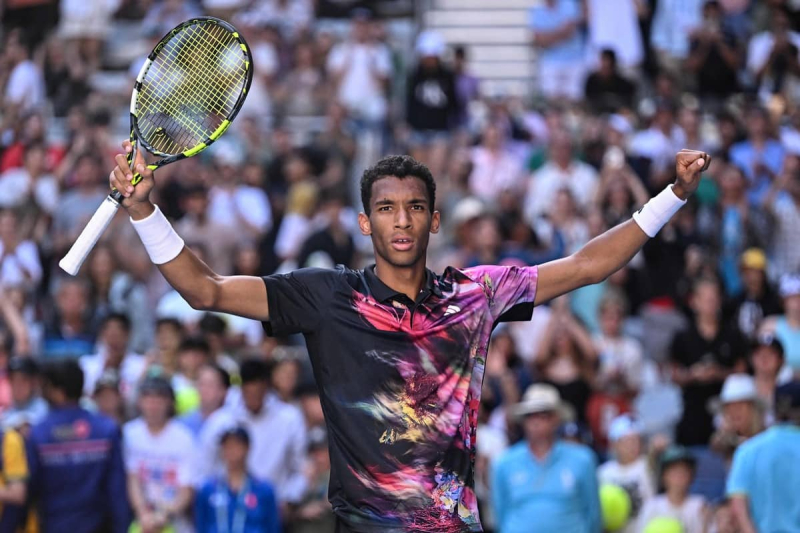 MELBOURNE, Australia | It has not been so easy for Félix Auger-Aliassime since the start of these Australian Open, but the Quebecer finally said he was “generally happy with his level of play” on Friday, after his victory in the third round against Argentinian Francisco Cerundolo.

“I got off to a good start in the match, rejoiced a smiling and relaxed Auger-Aliassime at a press conference. I'm happy with how I started. I was playing my best tennis. Then, afterwards, it is normal for your opponent to react. »

To see Félix go in this first round, completed in 25 short minutes, we thought that the sixth favorite would not last forever on the well-filled John Cain Arena at the end of the afternoon in Melbourne.

In front of him was a player who, apart from a few nice shots here and there, did not have the weapons to beat Félix, who had made good adjustments since his last performance.

A “walk in the park” would surely have been much appreciated by the 22-year-old, who had taken almost four hours to eliminate his compatriot Vasek Pospisil in the first round, then a little over three hours to overcome the Slovak Alex Molcan in the second round. By making up for a deficit of two sets to zero, it should be remembered.

But the aggressive and precise “FAA” gradually disappeared in the second set while, as the Quebecer pointed out after the match, his opponent had a burst of pride.

The two players exchanged breaks at the start of the set, before Cerundolo took the lead for good.

< p>The seventh world player had four chances to set the record straight at 5-3 on the Argentinian's serve, but he had to face the facts: this match was not going to end in three small sets.

Even if he wins the tournament…

Félix explained it after his victory against Molcan: he he's not a big fan of the balls used this year in Melbourne, which tend to slow down over rallies and don't benefit his tennis.

His opinion hadn't changed on Friday, despite qualifying for the round of 16. “And he won't change either if I win the tournament!” he said, laughing.

The Quebecer, however, took advantage of his break day on Thursday to make some adjustments to his game, and these paid off.

The other two sets, however, were all to the advantage of the Quebecer, who quickly broke at the start of the third, then the fourth .

The 28th favorite saved three first match points on his serve, but could not do anything when Auger-Aliassime got it again in the next game.

Here is the Quebecer in the second week of the first major round of the season, a fact he noted during the traditional dedication of the camera lens, after his victory.&nbsp ;

A result he had also achieved last year, even reaching the quarter-finals, where he was stopped by the eventual finalist, the Russian Daniil Medvedev.

But despite this signing, Félix “does not have a different approach at this stage of the tournament”. “I prepare for each confrontation with the same seriousness or the same discipline”, he pointed out.

When meeting the journalists, Félix thought that he would cross swords on Sunday with Briton Cameron Norrie, 11th favorite in Melbourne. A player he's faced six times since the start of his career… and beaten five times. the surprising Czech Jiri Lehecka, 71st in the world, against whom the Quebecer has never measured himself.

“I know that from this moment, and for all the matches that will follow, I have to play my best tennis,” claimed the sixth seed. And if I'm not playing my best tennis, I have to be at my best mentally and physically. »

It's already off to a good start.