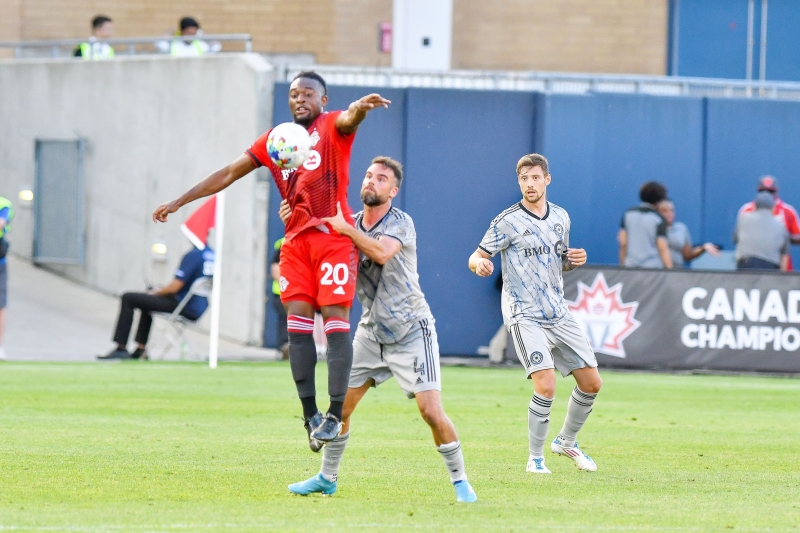 CF Montreal hosts FC Charlotte on Saturday night, and things have changed a lot since these two teams met less than a month and a half ago.

Montréal then won 2-0 in North Carolina and added an eighth win to its record streak of unbeaten matches.

Since then, Wilfried Nancy's squad have won only just one of his next four games in MLS, adding a win and a loss in the Canadian Championship.

In the Charlotte camp, we did some spring cleaning by thanking head coach Miguel Angel Ramirez and three of his deputies.

For Montreal, it's important to bounce back since it's a last game at Saputo Stadium before a week-long trip to the west coast that will take the team to Seattle to face the Sounders and to Los Angeles where they will visit the Galaxy.

“It's a huge game because we don't want to lose three games in a row. We're going to be on the road for a while so we have to maximize this game in front of our fans,” insisted striker Kei Kamara yesterday morning.

Rudy Camacho added by specifying that it was necessary to be able to set foot on the plane with a better record.

“We are going to have a complicated trip, so we have to take points at home”, said defender.

The Bleu-blanc-noir has a record of four wins and three losses at home, which is not the ideal in a league where games are known to be difficult to win in enemy territory.

“We are in a situation where we want to win at home, recognized Nancy. The standards are higher this year and we can't afford to lose points like we did against Austin [last Saturday]. »

Let's go back to these three defeats in four games. How do you break such a streak after having experienced such a good one just before?

“It's a bad period, we don't get what we want and in the way we play, we don't do what we want either,” admitted Camacho. We get by by keeping a cool head, by continuing to work, but above all by working harder. ”

Ramirez was replaced by Christian Lattanzio, who has since compiled a record of a win and a draw.

But the coach- Montreal chief assures that the change of guard has not had a huge effect on the way Charlotte plays.

“In the game idea, it’s always the same team. They try to play, they are aggressive and they play high. The new coach plays in a very precise system while Miguel changed”, he however specified.

During their victory in Charlotte, CF Montreal delivered one of their best defensive performances of the season. Perhaps even the best, according to Camacho.

“We had a benchmark game defensively against them. This is the kind of performance that must be repeated and over the long term. We blocked them, I felt really strong in Charlotte and I would like us to play like that more often.

We are therefore far from the team that allowed four goals in Toronto on Wednesday night.

The French defender, however, maintains that it has nothing to do with the turnover.

“It doesn't matter who plays, it's a defensive block so I don't think it's a function of the players playing. In training, we use the same system so the guys are used to it. »

The CF Montreal has played two games since Djordje Mihailovic was injured and was unable to score a single goal.

The importance of the American midfielder can no longer be doubted, who hit the target seven times and provided four assists in 14 games.

“Djordje is important, talking about it shows it,” said striker Kei Kamara yesterday morning. But he doesn't play every game and there are several other players who can fill that position.

Kamara, however, said his absence alone is not enough to explain the team's struggles.

“We miss Djordje, we miss Kamal [Miller, a defender], we miss several players. »

The contribution of Lassi

Among these players is left-back Lassi Lappalainen, who has just come out of the COVID protocol.

“Lassi brings us depth naturally and it is a profile that we miss, explained Wilfried Nancy . This means that we try to attract the opponent when we rather need to move the opposition from left to right.

The head coach hopes to be able to count on the Finn on Saturday evening, but was not yet convinced yesterday morning.

“I hope he can help us, we will do everything for it. According to studies, one in five players is more likely to be injured when returning from COVID,” said Nancy.

We However, it comes back to these two consecutive shutouts since last Saturday, which surprises from the best offense in the Eastern Conference with 28 goals.

“There is no concern, although I would have liked us to be sharper in the last third,” conceded Nancy, who also noted with some pleasure that the opponents played differently against her team.

“The teams know us so they put 15 players in the center of the field”, he imagined.

“What we do in the middle, we can also do on the side, added Nancy to explain how her team can work around the problem. You can vary the game from left to right. We have to be unpredictable and here we are a little too predictable. »

Despite a very decent first season, Charlotte fired head coach Miguel Angel Ramirez and three of his assistants, May 31, after only 14 regular season games. It is Christian Lattanzio who is in charge.

It seems the message was not getting through between Ramirez and his players. “There was a fracture, the players did not adhere to his idea. I saw the relief on many faces,” Captain Christian Fuchs told the Charlotte Observer.

< p>It was ultimately a lack of consistency in Ramirez's playing philosophy that caused his loss. “The game plans changed regularly and that caused confusion,” explained Fuchs, who also questioned the physical preparation.

Charlotte offers very different experiences whether a match is played at home or abroad. At home, the team has a record of six wins and two losses. On the road, the team has still not won a match (0-6-2).

Charlotte is experiencing the same problem than several expansion teams with a rather anemic offense. The North Carolina team has 16 successes in as many games. Fortunately, the defensive game is good with only 19 goals against.