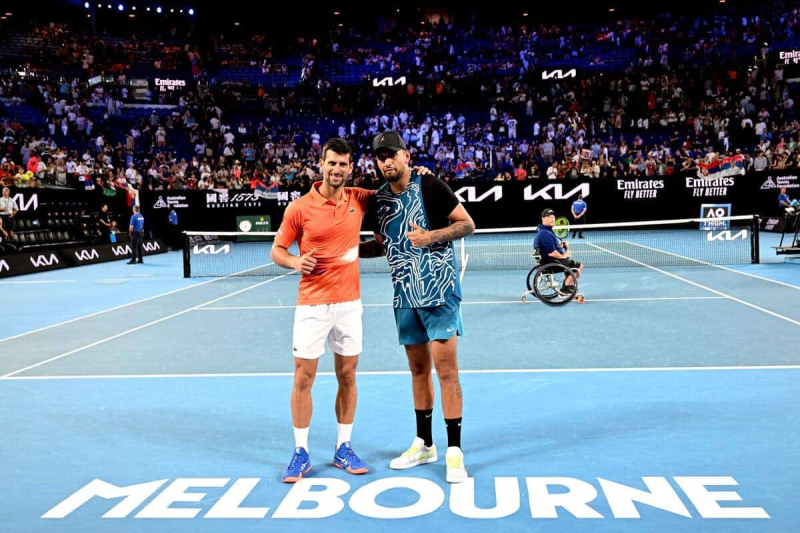 MELBOURNE, Australia | Novak Djokovic is back in Australia. A year after being deported from the country following the cancellation of his visa, the Serb says he has no resentment. “If I had any, if I wasn't able to get over it, I wouldn't be here,” pointed out the great champion on Saturday.

Little throwback. In January 2022, “Djoko”, not inoculated against COVID-19, arrived in Australia with the aim of playing in the first major tournament of the season. He claims to have a special visa, because vaccination against the virus is then mandatory to enter the country.

However, his visa was canceled by the government because he was deemed non-compliant. Djokovic was placed on two occasions in detention, in a Melbourne center for illegal immigrants.

On the eve of the tournament, where he was looking for a ninth title, the “Djoker” was finally expelled of the country.

In a recent interview with the Australian television channel Channel 9, Djokovic confided that he had struggled to out of his home in the weeks following this saga.

The former world No. 1 also blamed some media outlets for portraying him as “a bad guy”.

But that's the end of the resentment. Djokovic was eager to return to Melbourne. It's unclear if it's the grounds at Melbourne Park, the atmosphere or the sunshine, but Australia are doing so well at fourth seed. His nine triumphs are a record. A record that he intends to improve this year.

“All the positive experiences I had in Australia supersede what happened last year,” said a relaxed Djokovic on Saturday.< /p>

If he was impatient to reconnect with the tournament – ​​and above all, with the Rod Laver Arena, the largest stadium in Melbourne -, Djokovic admits however that he was a little afraid of the reception of the public after the events of last year.

His anxiety was quickly dispelled on Friday when he received a warm welcome in the charity exhibition match he played against local favorite Nick Kyrgios.

“J I was very emotional with stepping onto the pitch, he admitted. [But] I am very grateful for the welcome, the love and the support that I have had from the fans. »

The Grand Slams, the ultimate goal

Djokovic does not hide it: he is in Melbourne to win a 10th title and at the same time, get his hands on a 22nd major trophy. He would thus equal his greatest rival, the Spaniard Rafael Nadal, champion in his absence last year.

Because at almost 36 years old (a figure he does not like to be reminded of, he scoffed in front of reporters), Grand Slam titles are now his main goal.

“This is the reason why I continue to play tennis, pointed out the champion. I want to be the best. I want to be winning the biggest tournaments on the planet. And there is no bigger than a major tournament. »

His vaccination status prevented him from playing many major tournaments last year. Not just Australia: Djokovic was notably absent from Indian Wells, Miami, Montreal, Cincinnati and the US Open.

But when he played, the Serb won. He won the ATP Finals, which brings together the eight best players of the season, without losing a match. And last week, in Adelaide, “Djoko” won the trophy by missing only one run.

Highlight: Djokovic will begin his tournament Tuesday around 5 am, in Quebec, against Spaniard Roberto Carballes Baena, ranked 75th in the world.

After criticizing Djokovic, Kyrgios befriended him

MELBOURNE, Australia | In the early years of his career, Nick Kyrgios, “the terrible child of tennis”, multiplied the criticism of Novak Djokovic and Rafael Nadal.

Of Djokovic, Kyrgios had said, in a podcast released in 2019, that he “craved to be loved.”

“I feel like he wants to be loved so badly and I find that unbearable. I also find his celebrations [when he blows kisses to the crowd] unbearable,” the Australian added.

Three years have passed and now Kyrgios took to the field with “Djoko” on Friday for a charity match in Melbourne.

Tickets cost around $20 and the funds raised was donated to the Australian Tennis Foundation, which helps underprivileged children play tennis.

“It's important to have him with us,” said the Australian. He is one of the people in our sport. One of the greats [Roger Federer] announced his retirement last year and I don't think we realize how important they are to tennis. »

The saga brought them closer

Saturday, at a press conference, the “bad boy” – now slightly calmer – returned to the moment that brought the two players closer.

“During the challenge he faced last year last, the COVID-19 story, nobody really supported it. It was a moment that went beyond tennis, where people who care about your well-being will stand up for you, Kyrgios said. And I did. I felt it was necessary. »

“What I did was more important than anything I had said in the past,” he continued. I defended it in front of my country. It was not easy for me, I received a lot of criticism. But he liked it and we started talking to each other. »

One of the favourites?

Finalist at Wimbledon last year – against Djokovic, by the way –, quarter-finalist in New York , Kyrgios will begin his tournament around Tuesday around 3 a.m. in Quebec, against the Russian Roman Safiullin, 98th in the world.

At 27, for the first time in his career, the Australian has the feel like one of the favorites to win a Grand Slam tournament.

Granted he is only the 19th seed in Melbourne, but his results from the second half of 2022 in Grand Slam awards suggest he could go far.

The picture of Australia's best player isn't plastered all over Melbourne Park, but Kyrgios says he “feels his country wants him to wins.”

“It's a privilege, he pointed out. It's a good feeling. »