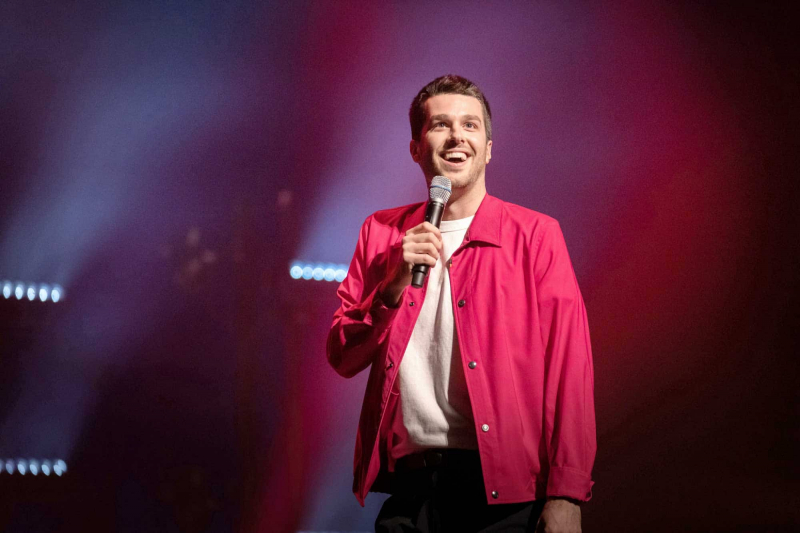 After notable appearances in various galas, comedy evenings, TV shows and podcasts, Christine Morency is ready to take the plunge. In this first solo show, aptly titled Grâce, the comedian delivers “a little embarrassing” personal anecdotes and asks questions about more committed topics, such as body diversity and sexual misconduct.&nbsp ;

“Thanks, it's my little personal therapy that I share so that we all laugh about it together, mentions the comedian in a press release. So much the better if it also serves us as collective therapy, but my intention is never to lecture. »

For the texts, Christine Morency worked with Justine Philie, who also does the script-editing, as well as Étienne Marcoux and Odrée Rousseau. The staging is by Charles Dauphinais, winner of an Olivier for Pierre Hébert's show, The taste for risk.

< em>Harry Paper and the cardboard parody

This is a proposal that departs greatly from the usual comedy tours. Here, the comedian redoes the complete Harry Potter films… with 18 sets and more than 100 cardboard puppets! After the success he had with La saga des étoiles, Jérémie Larouche decided to do it again with another cult franchise. It will have its media premiere on September 13, at the Lion d'Or.

As part of the Entourage stable (Mariana Mazza, P-A Méthot), Jo Cormier presents the first solo show of his career. In a colorful and original proposal, the comedian wonders whether we too are animals. Animalwill have its media premiere on November 1, at the Salle Albert-Rousseau in Quebec City, and on November 8, at the Olympia in Montreal.

The host and comedian is making a comedic comeback for the first time in over 20 years. After two shows launched in the 1990s, he is back around the theme of the deadly sins. It will premiere in Montreal (Théâtre Outremont, October 19) and Quebec (Salle Albert-Rousseau, October 25).

If I understood you correctly, you are you saying…

The comedian who briefly became a politician returns to his first love. In this sixth show with a revealing title, Guy Nantel humorously discusses his foray into politics within the Parti Québécois. Its Montreal premiere will be held on October 25 at the Théâtre Maisonneuve. In Quebec, he will be at the Salle Albert-Rousseau on November 8 and 9.

Rude – Forgive me if I love you

When she is not in an art gallery presenting her paintings or at the cinema acting in a film, Mariana Mazza spends most of her time in performance halls. This fall, she will continue the tour of her show Impolie – Pardonne-moi si je t'aime which she launched last spring. At the Olympia (September 23-24, December 16) and at the Salle Albert-Rousseau (October 30).

Launched last fall, the very first show by Pierre-Yves Roy-Desmarais received excellent reviews, in addition to drawing crowds. It is that the comedian succeeds in everything he undertakes. In this delirious one-man show, PYRD pushes the song a few times, to the delight of the audience. On view at the Salle Albert-Rousseau (October 18-19) and at the Olympia (November 18-19).

The humor of my life

This is the last tour of his career that the tireless storyteller is taking this fall. To relive with nostalgia the past decades by listening to the comedian dive back into his incredible anecdotes. At the Salle Albert-Rousseau (September 30) and at the Gesù (October 26).

Fans of the impersonator have had to be patient, due to the many postponements due to COVID, but now she should finally return to present her acclaimed show everywhere. To hear in a few minutes Adele, Edith Piaf and other Celine Dion. At Salle Wilfrid-Pelletier in Montreal (September 30, October 1) and in several other cities.

“Always in a half-philosophy, half-joke style, somewhere between existentialism and humour, Mes sentiments is a journey through time, life, and the feelings that ultimately make it weird to be someone anyway,” reads a statement about the comedian’s second show. At the Petit Champlain Theater (September 27, December 6) and Cabaret Lion d'Or (October 13-14-15-19-20-21).