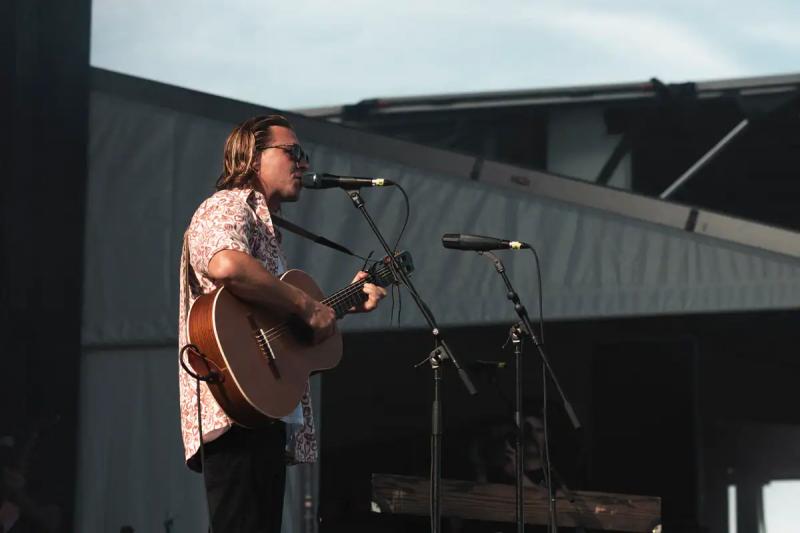 Brilliant sunshine, a gentle breeze cutting through the sweltering heat and an expanding crowd in front of the stages, all the conditions were in place for a magical inaugural day at the Cigale festival on Saturday at the Bay of Beauport.

In front of one of the first monster crowds of the festival, the Anglo-Montreal sextet The Franklin Electric seemed to be in communion with the public. Not seeming to know the group well, festival-goers were still lulled by the charm of the singer, Jon Matte.

Among the songs speaking of healing and letting go, It's not like before, the only one the group sang in French, seems to have charmed the audience the most.

California via Bouctouche, with the Hay Babies

In competition with the beach, it was in front of an initially discreet crowd that the group Les Hay Babies presented themselves, who began their performance with a song that lends itself well to the atmosphere of the festival, In California .

Dressed in identical neon-colored leotards, the girls mostly performed songs from their most recent album titled Letterbox, but also performed some catchy old hits like Des fois j'me demand and Bonnie and Clyde.

In front of an audience that doubled over the course of their show, they concluded it with the title track of their most recent opus, to loud applause from the crowd.

Marième “always there and for a long time to come”

It is with contagious joy that rapper Marième, who is celebrating her 20-year career, took to the stage to the rhythm of her DJ friend and hype man Papa T, singing the first lyrics by Vert jaune rouge, a song from his first solo album, after spending eight years with the CEA collective.

There again, in front of a modest crowd, the one many have known as a VJ at Musique Plus got festival-goers dancing, especially with Angel's Wings, a catchy remix of Robert Charlebois' classic.

The public also seemed to appreciate < em>My life, a song dedicated to her career on stage, where she will be “always there and for a long time yet”, a- she points out.