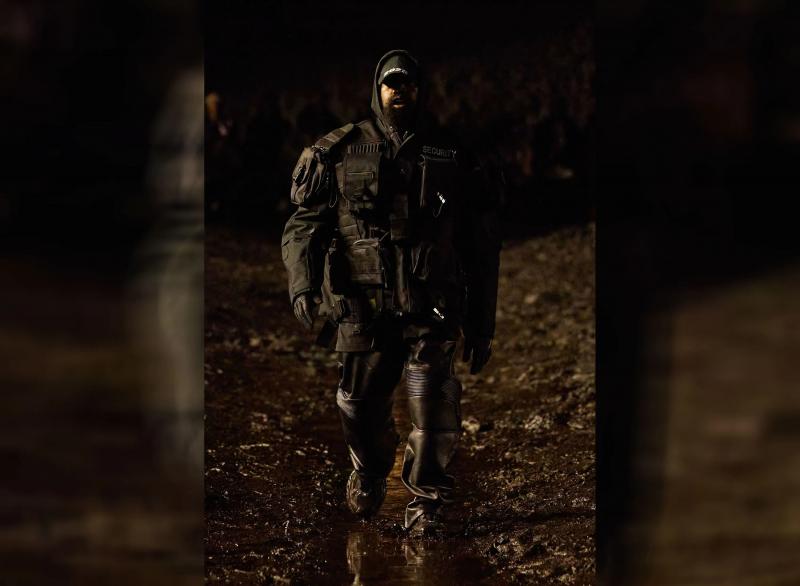 Rapper Kanye West opened the Balenciaga show on Sunday, where men in utility outfits or accessorized with baby carriers, and women in long dresses walked through the mud.

Cap under a hood, leather pants and black jacket with multiple pockets, wearing big sneakers, the American artist and friend of the Georgian Balenciaga designer, Demna, inaugurated the show in Villepinte, north of Paris, far from the splendor of Fashion Week.

His ex-girlfriend and Balenciaga muse, Kim Kardashian, was in the front row of this dark and disturbing show, which took place in a construction site setting with a strong smell of mud.

The male models were the stars: sometimes in black shorts and bombers, sometimes in neon green set consisting of shorts and hooded sweater between sportswear and interior outfits. White jeans were stained with mud.

Some of them sported as accessories baby carriers or colorful and childish handbags reminiscent of stuffed animals.

Others had large pink shopping bags or square bags worn on the shoulder with an integrated sleeve, the strong piece of this spring-summer 2023 collection.

The women, on the other hand, were chic for this mixed show on the sidelines of Women's Fashion Week.

They were treated to stiletto heels to tread the mud, which the men had to face in clogs and sneakers.

Tight pink, white or black dresses, sparkling and transparent outfits in chromatic dialogue with the mud, silver or train dresses: they seemed ready to leave this anxiety-provoking universe and go party.

“Make love, not war,” Demna wrote in the show's note of intent.

After recently announcing that he was dropping his Gvasalia name in the fashion world, where he now goes by his first name alone, he said on Sunday that he would no longer explain his collections.

As a 'visual art', fashion 'needs no history to be sold', Demna pointed out in her note, seeming to join the many designers who do not accompany their show of any press release.

“I hate the frame and the labels”, continues the one who nevertheless likes to show off the Balenciaga logo on his creations.

Fr March, the previous ready-to-wear show by Demna, who as a child had fled Georgia in the midst of war with Russia, had been a vibrant tribute to Ukraine, which was living through the first days of the Russian invasion.

He explained then that fashion lost its right to exist and that Fashion Week became “absurd”.

This summer, Demna became one of the ambassadors of the United24 platform, which serves to coll raise funds for the reconstruction of Ukraine.

Balenciaga has also put a sweatshirt up for sale, the proceeds of which will be used to help Ukrainian refugees.