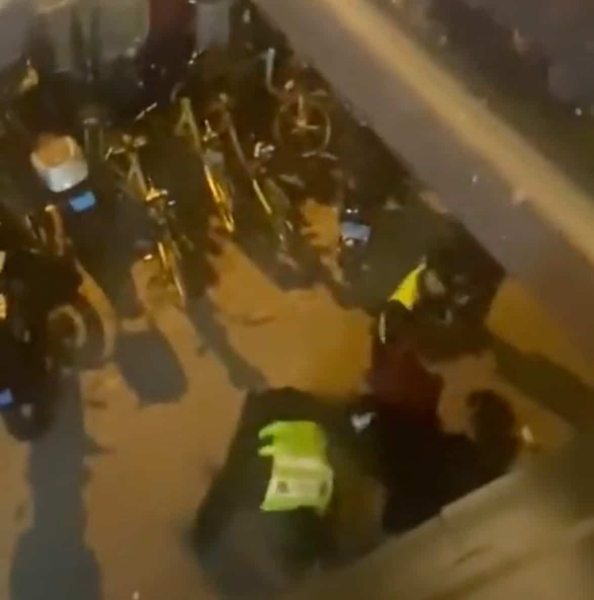 LONDON | The United Kingdom protested strongly on Monday after the arrest and police violence suffered, according to the BBC, by one of its journalists who covered the historic demonstrations against the draconian “zero Covid” policy in China, a new incident in a tense context between London and Beijing.

“Very concerned” about the treatment inflicted on Ed Lawrence, the BBC claimed that its journalist had been “arrested and handcuffed while covering the demonstrations in Shanghai”. According to a spokesperson for the British audiovisual giant, “he was beaten and beaten by the police” before being released.

“Freedom of the press and the freedom to demonstrate must be respected”, “no country is exempt,” responded British Foreign Secretary James Cleverly.

Describing the arrest of Ed Lawrence on Twitter as “deeply worrying”, the head of British diplomacy stressed that “journalists must be able to do their job without intimidation”.

Triggered by the mobilization against the confinements and restrictions imposed by the authorities to fight the epidemic of coronavirus, the anger which growls in China seems unseen since the pro-democracy demonstrations suppressed in blood in 1989.

“For his own good”

This incident comes in a tense context between Beijing and London, against a backdrop of strong criticism from the United Kingdom, in particular on the takeover of Hong Kong by China and recent incidents on British soil.

British Prime Minister Rishi Sunak is due to deliver his first major foreign policy speech on Monday night, arguing that the UK needs to stand up for its values ​​of freedom and openness more strongly, especially when dealing with China and Russia. /p>

The arrest of the journalist and the violence denounced by the BBC are “unacceptable” and “worrying”, denounced the British Minister for Business Grant Shapps, guest of the British morning shows on Monday. “Freedom of the press must be sacrosanct,” he told private LBC radio.

The BBC said it had “no official explanation or apology from Chinese authorities, beyond an assertion by officials, who later released him, that they had arrested him for his own good in case he caught the Covid (in the middle of) the crowd”.

“We do not consider this to be a credible explanation,” the BBC spokesperson stressed.

🚨 #BREAKING: BBC's Ed Lawrence being dragged away by police in #Shanghai. pic.twitter.com/gXGH4ZGpCA

“At least one (Chinese) national arrested after trying to stop police from beating me” , tweeted Mr. Lawrence on Monday.

The reporter later returned to the scene of the protests, according to videos posted to his Twitter account.

“Based on the facts”

Beijing assured Monday that Mr. Lawrence had not identified himself as a journalist “and did not voluntarily present his press accreditation”, according to Zhao Lijian, spokesman for the Ministry of Foreign Affairs, asking foreign media to “to abide by Chinese laws and regulations when (while) in China”.

The NGO Reporters Without Borders (RSF) condemned the arrest on Twitter and expressed its support for “all those who practice fact-based journalism in China”.

📢#China🇨🇳: RSF condemns arrest on Sunday in Shanghai of @BBCWorld journalist @EP_Lawrence, who was detained for several hours and beaten by police. RSF stands with all those practicing fact-based journalism in China & calls on regime to respect their right to report on protests. https://t.co/0sFKb3clfB pic.twitter.com/eWwKVQ8PgA

The British Secretary of State for Security, Tom Tugendhat, saw in this affair an echo of the “repression” that the Chinese Communist Party is trying to put in place. work “elsewhere”.

“Attempts at state repression here in the UK remind us of the urgent need to defend our own freedoms,” he tweeted.

The detention of Ed Lawrence is an echo of the repression the CCP is attempting elsewhere.

China's attempts at state repression here in the UK remind us of the urgent need to defend our own freedoms. https://t.co/Y72PW8rFVa

The United Kingdom was recently marked by the violence suffered by a pro-democracy activist from Hong Kong at the Chinese consulate in Manchester (North) and by the information from a Spanish NGO according to which Beijing has opened clandestine police stations in several Western countries, in particular on British soil.

Tom Tugendhat announced in early November in Parliament that the British police were investigating this matter . “Any foreign country operating in the UK must comply with British law,” he said, stressing that “any attempt to illegally repatriate nationals will not be tolerated”.