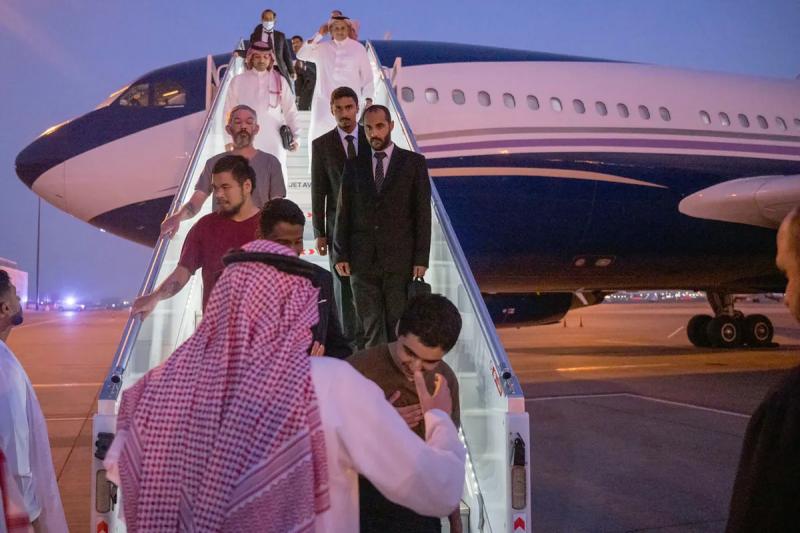 One of five Britons captured in Ukraine and returning to the UK after a prisoner swap between Moscow and Kyiv recounted in an interview with British tabloid The Sun being beaten and forced to sing the anthem in custody.

28-year-old Aiden Aslin was taken prisoner in Ukraine, where he was fighting for Kyiv, and was sentenced to death for mercenary charges.

After his surrender in the Siege of Mariupol in April, “the soldier asked in Russian 'where are you from?' I told him I was from Britain and he punched me in the face,” he told The Sun.

According to his account, he was then separated from the other prisoners and interrogated in the back of an armored vehicle.

“The officer was smoking a cigarette and knelt down in front of me to ask me 'do you know who I am?' I said no and he replied in Russian “I am your death”

“He said 'see what I did to you?' He showed my back. He showed me his knife and I realized he had kicked me with it.”

The officer then asked him if he wanted “a quick death or a beautiful death. continued the Briton, whose girlfriend is Ukrainian, to which he replied that he wanted a quick death.

“He smiled and said 'No, you're going to have a magnificent death “,” Aiden Aslin explained to The Sun.

He said he spent the next five months in a 1.20m by 1.80m cell infested with cockroaches and lice, deprived of daylight except when he was taken out to shoot videos. of propaganda or to be able to communicate with the British Foreign Office.

According to the Sun, the prisoner heard the Russian anthem played on repeat and was ordered to stand up and sing under pain of be beaten, and also to shout 'Glory to Russia'.

“After being forced to sing the Russian anthem every morning for the past six months, I think it's time to learn something a little better and learn the Ukrainian anthem,” Aiden Aslin tweeted on Sunday.

In the Sun, he further thanked the Russian oligarch “from the bottom of his heart” Roman Abramovich — under UK and EU sanctions — for his role in freeing the five Britons, who were able to return to their country after an exchange of pr sonniers favored by a Saudi mediation.