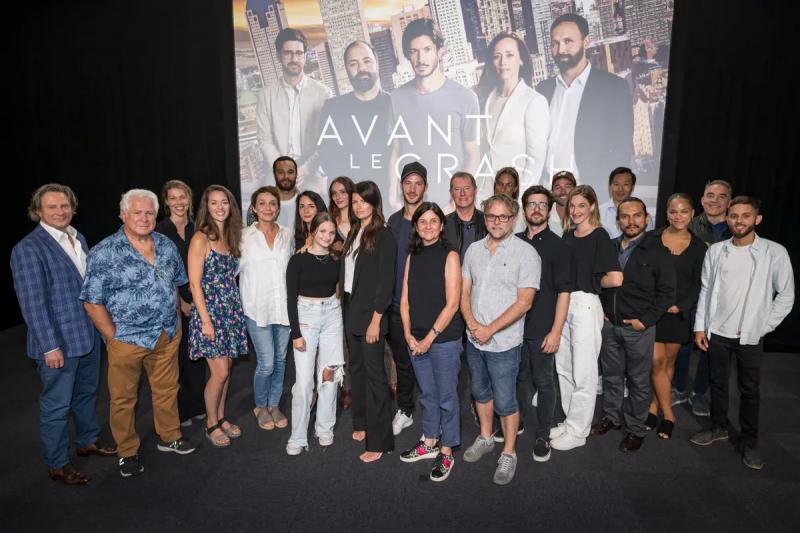 Ambition can be a splendid engine for a successful professional life when it is well channeled and dosed. She can also turn people into bastards when she becomes sickly and, for the most greedy, lead to their downfall.

The title of the new series “Before the crash” of ICI Télé suggests the fate awaiting the protagonists of the first series written by Éric Bruneau and Kim Lévesque-Lizotte, who form a couple. All of them will, one way or another, run into a wall.

“I would like to say that the world is run by empathy and love, but I think it is by ego, money and power. We wanted to look into this and talk about power in human relationships, ”explained Éric Bruneau, on the sidelines of the viewing of the first two episodes, Thursday.

Finance is only a pretext, because the action could have been camped in the artistic environment, where the actor saw people “who are able to walk on others” to get a role. He did not name names.

In addition to having written the 10 episodes with his sweet, Éric Bruneau defends the main role in the series directed by Stéphane Lapointe (“Miscellaneous facts”, “A criminal case”). We are very interested in five friends evolving or having evolved in the universe of investment bankers. The characters played by Éric Bruneau, Benoit Drouin-Germain, Émile Proulx-Cloutier, Mani Soleymanlou and Karine Vanasse are part of a tightly knit group.

< p>Marc-André (Éric Bruneau) is unemployed and penniless. Four years earlier, he voluntarily left the capitalist “system” and is looking for a meaning to give to his life. He even squats in the apartment of his 22-year-old girlfriend, Fanny (Juliette Gariépy). Under the impulse and the repeated calls of his friends to resume service for the benefit of the richest, the famous 1%, Marc-André will finally return to his first love – at the bottom of the ladder –, a decision, therefore, that 'we guess heavy consequences for the rest of things.

Like Marc-André at the start, Vincent also changed direction following a burnout, becoming a civil servant for Revenu Québec, which does not please his wife Stéphanie (Mylène Mackay), accustomed to a more extravagant.

“I especially felt like denouncing a system that pushes us to do the wrong things. […] All these characters want the good of each other, but ultimately individualism, the every man for himself that is very much encouraged in our society, that means that we end up doing actions that we regret, then we get up in the morning and we no longer recognize ourselves in the mirror,” said Kim Lévesque-Lizotte.

Let's face it, the bastard in the story – after two episodes at least, which could change – is François (Émile Proulx-Cloutier), a contemptuous, condescending and egocentric man. A cock in the office and with his friends, he nevertheless submits to Evelyne's (Karine Vanasse) desires once in the bedroom.

After concluding an agreement with the Chinese, François believes that the expansion file of a major Quebec chain of hardware stores is up to him. It is, however, her sweet – on maternity leave for five months! – who will inherit it and become a partner in the firm where they work, Olstrom, along with Patrick (Manu Soleymanlou). In “Before the Crash”, women are as strong as men, an assumed choice by the authors which has not yet materialized in the business district.

Of course, in this world where the money is flowing, we suspect that all shots are allowed for our greatest pleasure as viewers. The series is a drama, but there are also well-distilled touches of humor, which lightens the atmosphere.