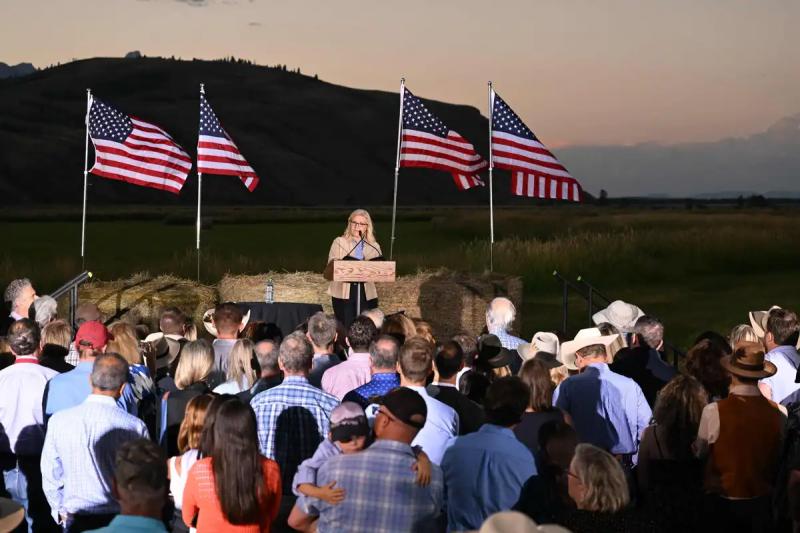 WASHINGTON | The recent defeat of Republican Liz Cheney against a pro-Trump in Wyoming exposes the upheavals of a Republican party which, with the former president, is moving away from traditional conservatism to center around a personality.

Ms. Cheney's rout on Tuesday not only marks her imminent departure from the House of Representatives, where she had a separate voice, but also signals the strong rejection of a anti-Trump line by Republican voters.

Liz Cheney aligned herself with the positions of Donald Trump when he was president, in 93% of her votes in the House. But his sin is to have since openly criticized the billionaire within a political movement that seems less and less open to dissent.

“I think the Republican Party today is in a dirty state, and I think we have a lot of work ahead of us,” Ms. Cheney told NBC Wednesday morning.

“It could span multiple election cycles, but I think this country needs a Republican party that's rooted in substance, in principle, in doctrine,” she continued. “A party that has, conversely, fully supported Donald Trump and his cult of personality, looks the other way.”

Many Republican presidents, from Ronald Reagan to George W. Bush, have done in the face of internal opposition. But debates about the people rarely eclipsed the fundamental orientations of the party: lower taxes, free trade, a weak federal power and a powerful military.

But the “Grand Old Party,” or GOP, is now united around a man who has little regard for the codes of traditional conservatism.

“The Republican Party is no longer the +party of Reagan+ or the +party of Nixon+”, estimates Aron Solomon, legal adviser for the agency of marketing Esquire Digital.

It is a party which had been lost and which has now found his way. But, for many, this path is frightening”, he analyzes with AFP.

While the doctrine dubbed “Reaganomics” has become a clear reference to neoliberalism, the ideology behind “Trumpism” is harder to pin down beyond a nationalist-tinged populism.

If it bears the mark of a form of freedom from the usual rules of politics, “Trumpism” also suggests a certain “cult of personality” around the former president, as described by Liz Cheney.

However, Donald Trump, who calls his Republican detractors “RINO” (“Republicans in name only”, “who are Republicans only in name”), has not always been linked to this party.

The real estate tycoon was a Republican in the 1980s, but later declared himself an independent and even for a time as a Democrat, a party he financed.

Abandonment of the program

The metamorphosis of the Republican Party can also be seen in the comparison, 40 years apart, between two national conventions, these high masses which dub the candidates before a presidential election.

For the launch of Donald Trump's 2020 re-election campaign, the Republican Party abandoned updating its political project to simply support the president-candidate and his priorities, however vague they may be.

“Unfortunately, the Republican principles seem lost,” wrote Sean O'Keefe, minister under George Bush senior, in a column. “Nothing exposes this better than the absence of a Republican agenda for 2020.”

Donald Trump's hold on the party became apparent when more than two-thirds of his elected House of Representatives refused to certify Joe Biden's presidential victory, just hours after the Capitol was stormed by protesters. supporters of a president who no longer wanted to leave the Oval Office.

And, further proof of his control, the ten elected Conservatives who had voted in favor of his second impeachment in the House of Representatives in January 2021, only two will try to keep their seats in the House in this fall's legislative elections: four refused to run, four others were defeated in the primaries.

Liz Cheney, who belongs to this last category, however, promised to “do everything” so that the former president never again accesses the White House, not closing the door on the possibility of presenting himself in 2024.

But for analyst Aron Solomon, Ms C heney would have more success on the airwaves than at the polls.

“It is more than likely that Liz Cheney will turn into a radio or television commentator”, he believes. “It would suit her well and she will reach more voters who really listen.”