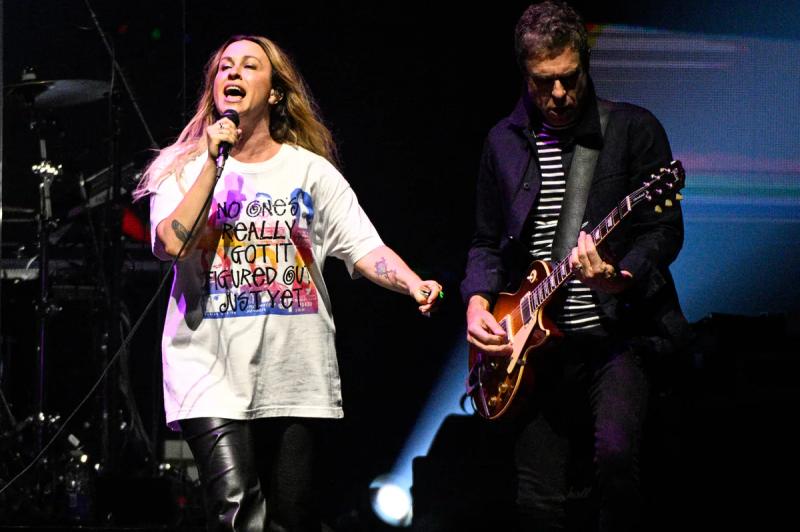 Alanis Morissette treated her “fans” to a candy box jam-packed with nostalgia-flavored candies Tuesday night at the Bell Center as part of her anniversary tour that she started in early summer .

Back on the stages of the metropolis after 10 years of absence, the singer-songwriter played the titles of her totemic album Jagged Little Pill first appeared in 1995, reissued in 2015, then reappeared on shelves in 2020 in a Deluxe Edition, as part of its 25th anniversary world tour.

Dressed in a baggy T-shirt and leather pants, the tender-hearted rocker recounted in song the emotional wreckage she went through during her youth, addressing toxic relationships, domestic violence, the place of women , and resilience. Sometimes sober, sometimes powerful, sometimes broken by emotion, her rich voice full of nuances seemed fully mastered, as she ran into some trouble last month that forced her to cancel two dates in Britain.

Selling over 33 million copies, “Jagged Little Pill,” which won Grammy Awards for Album of the Year and Rock Album of the Year year in 1996, including Hand In My Pocket, You Learn and All I Realy Want, key pieces in the career of Alanis Morissette. It is with them that the 48-year-old Ontario singer opened her concert, to the delight of the spectators who often got up from their seats to sing with her or dance, a glass of beer in their hand raised high in Cheers to the air.

The crowd was also very boisterous in their applause of encouragement and recognition. Such was the case on Head over my feet for which the singer took up her acoustic guitar and her harmonica.

The iconic Ironic, kept in the last part of the concert, for its part served as a discreet tribute to drummer Taylor Hawkins, who died earlier this year and who accompanied Alanis Morissette in her debut before joining the Foo Fighters. Images on which he appears on occasion, taken during the singer's first world tour, were also projected on the huge screens that adorned the stage.

The breakup song par excellence You Oughta Know, which has often been covered by, among others, Britney and Beyoncé, was played just before the encore and was without a shadow of a doubt one of the favorites of the public, given the enthusiasm assumed by the latter from the first notes.

Thank you was the very last one.

Alanis Morissette has paved the way for many artists who are evolving on the music scene today with her liberating hymns and her demanding sweetness, such as Avril Lavigne, P!nk or Olivia Rodrigo. At the start of the concert, the presentation of a nice video montage retracing the last 25 years of the musician in popular culture recalled the important contribution of the latter in the Canadian and American artistic landscape.

< em>Jagged Little Pill is one of the most iconic rock albums in Canadian popular music.

The evening opened with alternative rock band Garbage, who continued the hits of the mid-1990s, notably thanks to the titles Stupid Girl as well as Only Happy When It Rains and Queer which were played pending the arrival of Alanis.

The Jagged Little Pill anniversary tour, which was originally scheduled to take place in 2020 before being pushed back for obvious reasons, will be passage on the Plains of Abraham as part of the Festival d'été de Québec on Friday starting at 9:30 p.m.

The Storm Before the Calm, the new al Alanis Morissette's bum has been available since June 17.