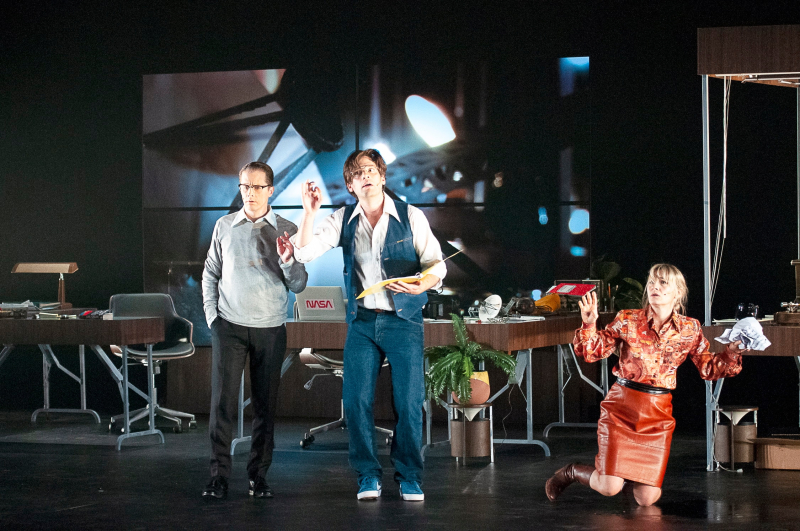 Half-documentary, half-fiction, the play If you're ever listening to usingeniously combines a part of space exploration and debates on human evolution, despite a certain lack of emotion.

Presented at the Théâtre Denise-Pelletier, this piece tells the story of the development of the disc of gold placed in the Voyager probe, launched into space in 1977, like a bottle in the interstellar sea that could eventually be collected by extraterrestrials. This disc summarized in sounds and images the Earth and the human species.

Written and directed by Maxime Carbonneau and Laurence Dauphinais, the play begins with very comfortable actors who play themselves by addressing their own fears about the future of humanity, threatened by climate change, nuclear, etc Nothing new under the sun, even if the whole thing is well summarized.

This sets the stage for the arrival of the characters and of this golden disc, this object which “serves to leave a trace for those who will survive us”. A general public didactic approach follows to popularize this subject. A host of details, the relevance of which varies according to the degree of knowledge and interest of each spectator, are then revealed. This educational discourse is well supported by archival footage and a simple but attractive setting.

A bit of fiction

The story then slides on the impossible choices that the five protagonists had to make in terms of images and sounds to sum up our world. These fictitious debates give rise to lengths, even if tensions between the participants add a little spice. Obviously, it is not difficult to conclude that these choices would certainly not be the same today.

More lyrical, the last part of the show is successful. It shows with more emotion the immensity of space and the grain of sand that the Earth represents in this whole.

With an interesting fictional plot, but without bite, as well as an educational speech where consensus prevails over controversy, this show should especially appeal to an audience that knows little about the cosmos or the great challenges of humanity. Note that an interactive digital experience can be enjoyed before the performance by downloading the application bearing the same name as the piece.

If you ever listen to us is presented until to November 25 at the Théâtre Denise-Pelletier.