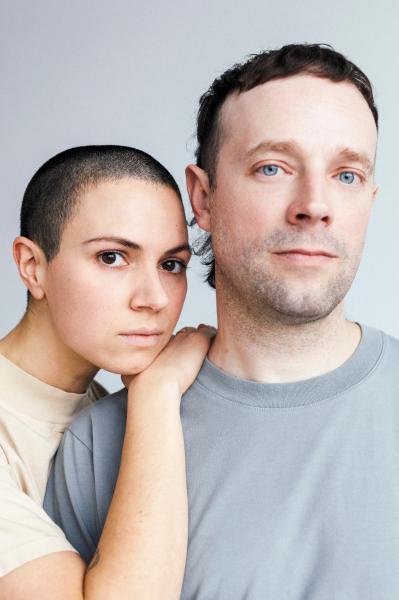 Very prominent musicians in various projects, including Plants and Animals, and couple in real life, Adèle Trottier-Rivard and Nicolas Basque have decided to team up for a new musical duo: Bibi Club. On their first full album, The Sun and the Sea, they wanted to mix lightness and depth.

It was naturally through music that Adèle Trottier-Rivard and Nicolas Basque met about ten years ago. While Nicolas was part of the group Plants and Animals, Adèle accompanied various artists in the studio and on stage, including Louis-Jean Cormier.

One thing leading to another, the singer also began to collaborate with Plants and Animals. And then, love was born between the two musicians. Today, Adèle and Nicolas have been a couple “for six or seven years”, they had a child together, aged four, and also have two other children at home, aged 9 and 16.

It is all these beautiful people that the name Bibi Club represents. “It comes from our family life, says Adèle. Bibi is an affectionate word meaning “darling” in Arabic. My aunt always called me that when I was young. It really is a loving word.

“There was a time when we were trying to come up with a band namewhich sticks, we did the dishes after supper, says Adèle. The children were dancing in the living room, it was chaos. There was noise! I went to the bedroom to have a mini-break (laughs). And there, to hear all this chaos outside the room, I finally found it beautiful and inspiring. I realized that this was really our life. We are like a small club. »

In 2019, Bibi Club launched a first mini-album. “We had to do a lot of research and musical exploration to find our own voice,” says Adèle. We wanted to let loose loussein what we really were artistically. It was a good challenge for both of us. »

When asked about their influences for this new adventure, the two musicians first name the late jazz artist Alice Coltrane.

« There is something in his music, like a lightness and a depth, but also quite bright, says Nicolas. We often came back to that in the studio. »

They also listened a lot to the London artist Tirzah. “She does something quite unique,” ​​says Nicolas. It seems simple, but it is at the same time quite complex, very sought after and very instinctive. I think we wanted to go in that direction, to work with instinct. »

Since the beginning of her career, Adèle Trottier-Rivard has mainly been an accompanying musician for other artists. Has she ever thought of making a solo album?

“No, never,” she replies without hesitation. I have known for a long time that I want to make my own plans, to have something that belongs to me. But I knew I needed to share this with someone. Maybe it's out of habit, because I've always worked as a team. I really like to exchange ideas and bounce back. »

For the moment, Bibi Club has a few shows scheduled for the next few weeks, including a visit to France in October. The two lovers are ready for the project to grow in the next few years.

“That’s the plan, in fact, says Nicolas. We don't have control over everything, but we are ready to [dedicate] time and energy. We just want it to continue. It would be nice to get out of our house! (laughs)”

♦ The Bibi Club album, The Sun and the Sea, is currently on the market. The group will be performing on September 29, at the Ministère de Montréal, as part of POP Montréal. bibiclub.ca.