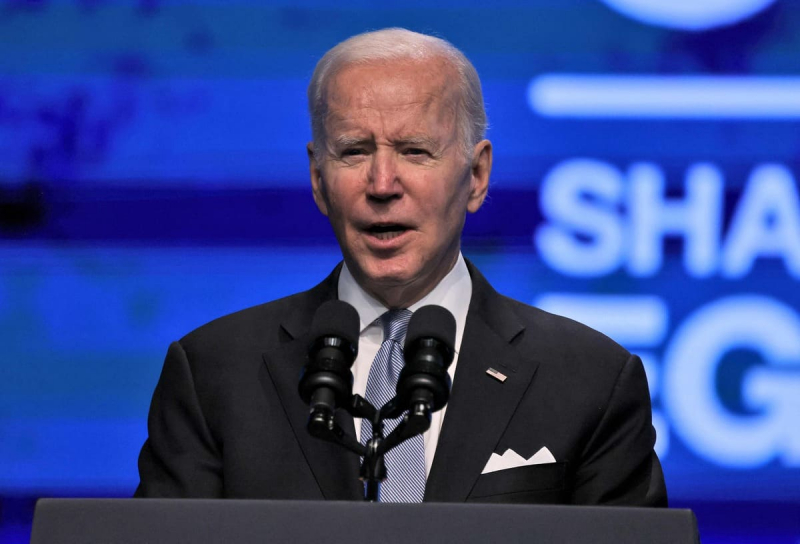 US President Joe Biden called on “all countries to do more” to reduce their greenhouse gas emissions in the face of a climate crisis that threatens the “life of the planet”, during a brief stopover on Friday at COP27.

“The climate crisis is about human security, economic security, national security and the very life of the planet,” launched the American president, listing the climate-related disasters that have multiplied in recent months around the world.

Brandishing as an example his colossal plan of nearly $370 billion in climate investments, he assured that the United States would meet its objective of reducing emissions by 50% to 52% in 2030 compared to the levels of 2005.

The war in Ukraine “only reinforces the urgency for the world to get out of its dependence on fossil fuels”, he further estimated.

“All countries need to do more. At this meeting, we must renew and raise our climate ambitions”, he insisted, while the current commitments of the various countries leave the planet on the trajectory of a catastrophic warming of 2.8°C, according to the UN.

Be well beyond the objectives of the Paris agreement, the cornerstone of the fight against climate change, namely to contain the rise in temperatures well below 2°C, if possible at 1.5°C compared to the pre-industrial era.

A landmark report released on Friday added to the sense of urgency, calculating that greenhouse gas emissions from the burning of fossil fuels, of which the United States is the world's largest producer and consumer, will again reach records in 2022.

Mr. Biden's exhortation is aimed without saying so at the major emerging countries, such as India or China, with which Washington currently has very tense relations.

Cooperation between Beijing and Washington, respectively the world's largest and second emitters on the climate issue, is indeed considered crucial.

Chinese President Xi Jinping did not make the trip to Sharm el-Sheikh, but the two men will meet Monday in Bali, Indonesia, on the sidelines of the G20 summit.

On another issue, insufficient aid to poor countries, on the front line of climate change, the American president s is on the other hand shown to be very cautious.

“Apple in my hand”

Washington has indeed still not honored its commitments as part of the promise of rich countries to provide 100 billion dollars of financing per year to the poorest, to fight against emissions and adapt to climate change.

M. Biden reiterated his commitment to an $11.4 billion contribution, but a future Republican majority in Congress could block it, even if the presidential camp avoided the debacle announced in the midterm elections this week.

“As a down payment”, he promised 150 million for adaptation projects in Africa, but he refrained from mentioning the “losses and damages” already suffered by frontline countries, often among the poorest, subject to the heart of this COP.

On the contrary, he reiterated the American position of seeking to mobilize the private sector in the face of a challenge presented as global and which will require “trillions” of investments.

“Joe Biden comes to COP27 and makes new promises, but his old promises haven't even been fulfilled. I prefer an apple in my hand than the promise of five that never come,” castigated Mohamed Adow, director of the NGO Power Shift Africa.

Before address the COP, Mr. Biden had a meeting with his Egyptian counterpart Abdel Fattah el-Sissi.

The American president told the press that they would discuss the regional situation and the “ solid partnership” in terms of defense between the two countries.

But also “continue the dialogue on human rights”. According to the White House, he was to mention in particular the fate of Alaa Abdel Fattah, pro-democracy blogger imprisoned and in danger of death after seven months of hunger strike.