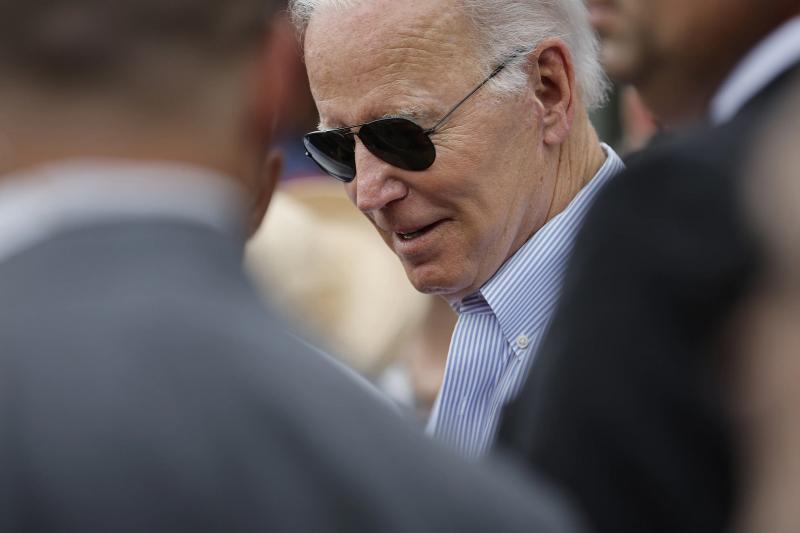 US President Joe Biden is expected in Israel on Wednesday for his first tour of the Middle East, a real balancing act between the twists and turns of the Israeli-Palestinian conflict, tensions with the Iran and negotiations with the Saudi oil power.

Air Force One is due to land around 3:30 p.m. at Ben Gurion airport in Tel Aviv, where Mr. Biden will be greeted by the President Isaac Herzog and Prime Minister Yair Lapid.

And immediately the Israeli army gave him a demonstration of its technologies on the spot, including an anti-drone laser, a way of rallying Washington to its diplomatic offensive against its enemy number one: Iran.

Joe Biden , a veteran of the American political scene, had first visited Israel in 1973, when this country was, under the leadership of Golda Meir, an ally of the Shah's Iran.

Today, Israel is trying to prevent Western powers, including the United States, from reviving a 2015 international pact framing Iran's nuclear program, which Donald Trump scuttled in 2018.

With a possible lifting of US sanctions against Iran, the Jewish state fears that an agreement will inflate the aid provided by Tehran to allies like the Lebanese Hezbollah and the Palestinian Hamas, pet peeves of Israel.

< p>Iranian President Ebrahim Raisi retorted on Wednesday: “If the visits of American officials to the region are aimed at strengthening the position of the Zionist regime (Israel, editor's note) and normalizing its relations with certain States, these efforts will not bring security to Israel.

Police will deploy some 16,000 troops during the visit and many roads will be closed in Israel and Jerusalem where the police crisscross the city center.

On King David Street in Jerusalem, where Joe Biden will stay, poles were topped with American flags to mark the first visit by a US head of state since Republican Donald Trump in 2017.

Au Much to the chagrin of Palestinians, the Trump administration recognized Jerusalem as Israel's capital and moved the US embassy there, a move Democrat Joe Biden did not reverse.

The question of Jerusalem is one of the main stumbling blocks in the Israeli-Palestinian peace process suspended since 2014. The Palestinians aim to make East Jerusalem, the eastern part occupied by Israel since 1967, the capital of a future State.

Despite a request, no meeting is scheduled with the family of Shireen Abu Akleh, the American-Palestinian journalist shot and killed in May during an Israeli operation in the West Bank, a Palestinian territory occupied by Israel since 1967.

< p>The UN, the Abu Akleh family and various journalistic investigations maintain that the shooting came from an Israeli soldier, a scenario deemed “likely” by the United States, which has ruled out the hypothesis of a deliberate shooting.

In addition to Israeli leaders, Mr. Biden is due to meet opposition leader Benjamin Netanyahu on Thursday.

Friday, he will meet in Bethlehem in the West Bank with Palestinian President Mahmoud Abbas.

If he claims to take the opposite view of Donald Trump, Mr. Biden has not reopened the American consulate in East Jerusalem , nor has he really sought to relaunch the peace process.

Another crucial subject: the prospect, still very hypothetical, of a normalization between Saudi Arabia and Israel, which has established links with several Arab countries in recent years.

Joe Biden will draw a hyphen symbol between the two countries by making an unprecedented direct flight from Tel Aviv to Jeddah on Friday.

“The fact that Biden is flying directly to Arabia sums up the dynamics of the past few months (…) We hope and act to so that this is the first steps, the beginning, of a process of normalization,” an Israeli official said on Tuesday.

The Biden administration would also like to obtain from the Saudi kingdom, the world's largest exporter of crude, that he opens the floodgates to calm the surge in black gold prices.

In the campaign, Joe Biden wanted to reduce the kingdom to the rank of “pariah” after the 2018 assassination of Saudi journalist Jamal Khashoggi. Elected, he declassified a report concluding that the crown prince and strongman of the kingdom Mohammed bin Salman, known as “MBS”, had “validated” this murder.

Saturday in Jeddah, it is expected that he meets “MBS”.