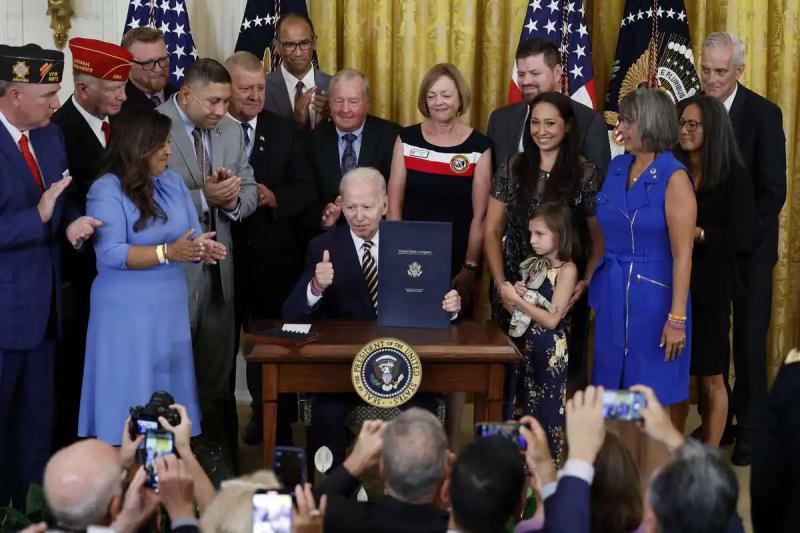 US President Joe Biden on Wednesday signed legislation to improve care for veterans exposed to toxic fumes, a cause dear to his heart since losing his son to cancer of the brain.

Braziers, known as “burn pits” in English, were used by the United States military in its post-September 11, 2001 conflicts to leave no trace outside the camp.

Their fumes are now suspected of being the cause of many ailments among the soldiers deployed on these basics, from chronic sinusitis to various cancers.

The law, dubbed the “PACT Act” and passed by Congress earlier this month, should guarantee access to medical care.

“Military service can lead to higher health risks,” including certain illnesses that can “build up after years,” the White House said.

“It can be difficult for veterans to establish a direct link between their service and illnesses resulting from exposure to the military environment”, a step that is essential to receive the necessary care, continued the executive, assuring that this law would help to correct this problem. /p>

Joe Biden believes these “burn pits” may be the cause of the brain cancer that killed his son Beau in 2015, who served in Iraq in 2008.

Relating his visits to U.S. troops in Iraq as a senator and vice president, the Democrat said he saw “braziers the size of football fields,” filled with the “scorched wastes of war.”

Subjected to 'poisonous fumes', many of the 'best fighters we sent to war' returned tr trained, sometimes seriously ill.

“My son Beau was one of them,” he explained.