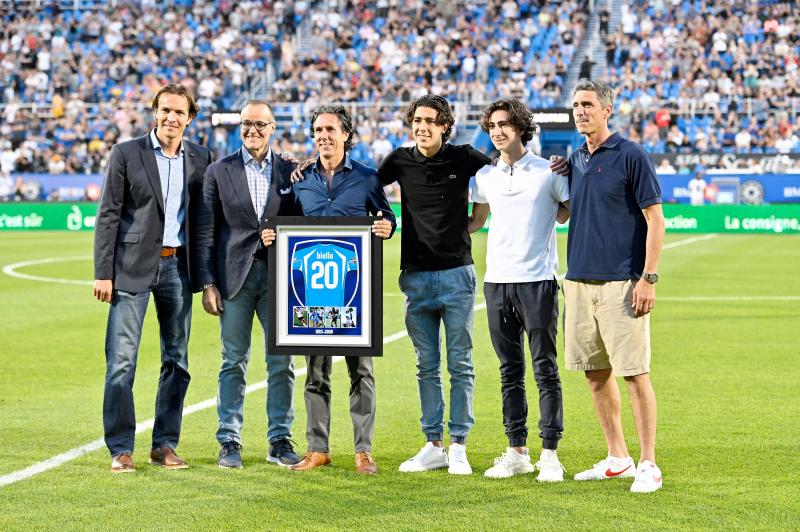 At halftime of the match between CF Montreal and Toronto FC, Mauro Biello made his debut among the greats of the Montreal Impact.

Biello, who is now assistant coach to John Herdman with the men's national team which will take part in the World Cup next November, has had his name added to the stadium's Wall of Fame.

He now finds himself alongside his former teammates Nevio Pizzolitto, Gabriel Gervais and Greg Sutton.

The short ceremony was intended to be sober, like the man. Fans weren't shy about giving him a good dose of love, however.

It was surrounded by his family and former teammates that Biello lived the moment.

We can say of Biello that he is a true legend of the club since he spent most of his playing career there and started his career as a coach there .

He wore the colors of the Supras, then the Impact, from 1991 to 2009 with a one-season hiatus with the Rochester Raging Rhinos in 1999.

He became an assistant as soon as he hung up his boots and made the transition to MLS working alongside Jesse Marsch, Marco Schällibaum and Frank
Klopas before taking over for him when he was fired, during the 2015 season.

That year, he led his team to the Eastern Conference Semi-Finals. In 2016, the Bleu-blanc-noir came within a half of reaching the MLS Cup final, ultimately losing in overtime to Toronto FC.

Met before the match, the team's in-house announcer, Robert Tanguay, was quick to talk about Biello.

“It's been thirteen years since he stopped playing and he there were still good players who came here, but he is still among the tops of the team, ”explained the one who has been the voice of the team for almost 30 years and who was looking forward to the ceremony.

“I tell you about it and I get chills. In my text, there are about eight O's at the end of his name. He was one of the first that gave me a thrill. »

Tanguay even made a more than flattering comparison to Biello.

“I met him during public training sessions across the province. He was an approachable guy. A guy like that is the soul and heart of the team.

“I don't want to compare him, but he's a Guy Lafleur in his own way. He is a simple and smiling guy. He never said no and took the time to stop chatting with people. ”

Among the supporters crossed at the entrance to Saputo Stadium, Éric Lussier had the opportunity to see Biello play.

“He was a player who was super dynamic on the pitch, always opportunistic. He was a good leader. If he's not the greatest, he's one of the greatest players at the club.

Karl Monney knew him best as a head coach and remembers his grit and willingness to put the interests of the team first.

“I remember that he did not hesitate to put Didier Drogba on the bench in order to make the decisions to make the team win.