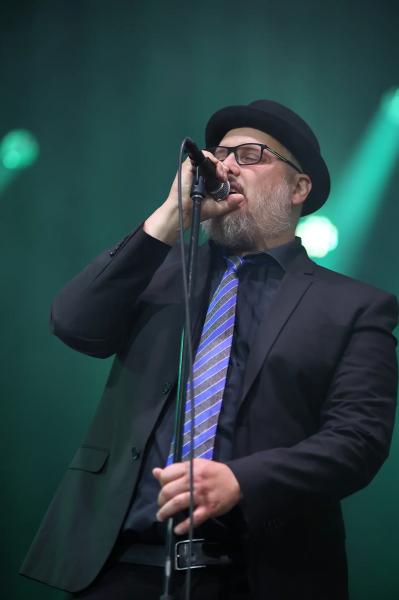 It was obvious, with the current context, that this evening was to be special. Fighting a battle against cancer, Karl Tremblay, singer of the Cowboys Fringants, received a huge dose of love, during the passage from the formation to the Festivent event.

The crowd was huge. The biggest of this 39th edition, which ended last night. The weather was nice, there was atmosphere and the rain that everyone was dreading obviously had other things to do.

In full control, hat on his head, goatee, sunglasses, black shirt and purple striped tie, it was a visibly fit Karl Tremblay who led the way, even inviting people on the Ferris Wheel to applaud.

Jean-François Breau and the other members of Salebarbes have conquered the public.

“Good evening Levis. You are lucky in Quebec tonight. This is where the most fun show is with Sara Dufour, Salebarbes and Les Cowboys Fringants. You're going to have a damn good evening,” he promised before kicking off the whole thing with The houses all alike.

The singer never referred to his illness. We were in the party and it was perfect like that.

After Ti-cul, La reine, including a few bars of Thunderstruck, from AC/DC, the crowd sang Octobre with force. We could see at that moment a broad smile appear, through the giant screens, on the face of Karl Tremblay.

“Bravo Lévis. It was beautiful,” he said. And that was indeed the case, before attacking Straight Aheadand The Demonstration.

And the public did it again during the very beautiful On my shoulder. A great moment where the hair lifted on the arms.

A fun moment followed when the singer left the stage for a “pee” break, bringing the Jérôme Dupras, Marie-Annick Lépine , Jean-François Pauzé and guest musicians to do a bit of improvisation.

“Send darling, come back! launched Marie-Annick Lépine, before her return for a superb version of America is crying.

Sara Dufour, who had started the evening, joined Les Cowboys for Merchant Navy, after a few notes from U2's Sunday Bloody Sunday.

A good version of Pub Royal, which the band rarely plays, and Shooting Stars, with the lights of thousands of cell phones, put an end to this beautiful Sunday full of magic.

For this last evening of the Festivent, we had set up a particularly festive program with the presence of Sara Dufour and Salebarbes.

A month and a few weeks after his visit to the Plains, for the celebration nationally, the sympathetic Acadian group has once again demonstrated that it is firmly establishing itself in the musical landscape.

People know the pieces and react. This was the case with Gin à l'eau sel, Les Beans, where the violin lines of Éloi Painchaud and Georges Belliveau intertwined, and Good Lord.

The group is solid on stage and demonstrates it with the uplifting Bosco Stomp, where multi-instrumentalist Jonathan Painchaud had a blast on the electric guitar. Salebarbes is delivered in a very dynamic way, with pleasure and aplomb. It works.

Full of energy, as is always the case, Sara Dufour gave a fiery performance. It was a second visit for the singer-songwriter of Dolbeau-Mistassini, after a first visit in 2019.

We were entitled, after Baseball , a replay of the theme song for the show Watatatow, in which she played the character of Laurence Bouchard, and an electrifying piano solo by Dave Chenel during Semi-route< /em>.

During Chic Chocs, we heard a few bars of Killing in the Name by Rage Against the Machine, where Paul Théorêt released guitar sounds à la Tom Morello.