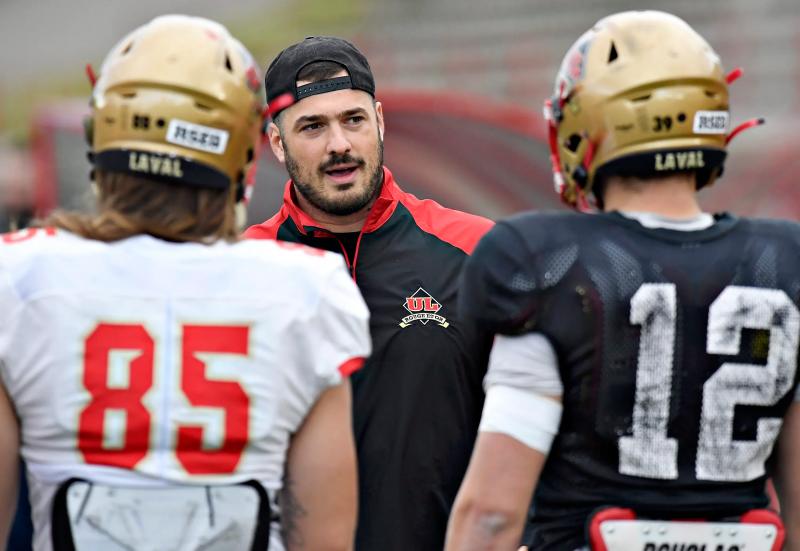 Antony Auclair is taking advantage of his recovery from a knee injury to lend a hand to the Rouge et Or.

Seriously injured and released by the Texans of Houston at the end of training camp at the end of August, the tight end is back in Quebec where he is undergoing his rehabilitation.

Auclair understands the Texans' decision to release him.

“It's a business decision and it was the best option for both parties, a- he summed up, Thursday, after training for the Rouge et Or dressed in the colors of his alma mater. The Texans needed a healthy player and I wanted to be 100 percent before I played. If I had stayed in Houston, I would have wanted to play even if I wasn't at 100 percent of my ability.”

Auclair tore his medial collateral ligament on the third day of training camp.

“ It's a good injury, but I surrounded myself well in Quebec with my usual team. , he pointed out. My physical trainer Pascal Champagne, my physiotherapist Guy Asselin and my speed trainer Fabrice Akué help me get back to health and fitness. I can also train as I want in the PEPS facilities. »

Auclair is in no hurry

Auclair remains hopeful of playing in the NFL this year, but he doesn't want to rush anything. He underlines. I don't have a deadline. Teams contacted my agent [Sasha Ghavami] and they had discussions. The door is always open to a return, but I am in a period of reflection. I am looking at the opportunities that might come my way.

After four seasons with the Tampa Bay Buccaneers, with whom he won the Super Bowl in 2021 as a member of the practice squad, and two seasons with the Texans (including this one since he is under contract), Auclair is eligible for the NFL retirement plan. Signed as a priority free agent in 2017 by the Bucs, he has 56 games behind the tie.

By lending a helping hand to the Rouge et Or coaching staff, Auclair will be better able to determine if he wants to commit to coaching after his playing career is over.

“&nbsp ;For the moment, I combine the useful with the pleasant by lending a hand while following my treatments, he said. I try to help guys and I give my opinion. It allows me to give back to young people and learn from one of the best coaching groups in the country.

“It's also a way to see if I really like coaching to get into it full-time,” continues the 29-year-old Beauceron. Careers are not endless and we must prepare for the future.

Mathieu Bertrand, special teams coordinator and center backs coach for the Rouge et Or, has no doubts about the abilities of his former protege.

“Antony is able to pass on his knowledge and that's the number one rule for being a good coach,” he said. We are really spoiled that he is present. The players are very happy. We'll take him when he's available. »

Bertrand sees himself again in Auclair.

« At the end of his career there At ten years old, the Rouge et Or brought me to Florida during spring camp to coach, recalled the former center back of the Edmonton Eskimos. I had caught the coaching bug and joined the team after my career. »

In addition to sharing his knowledge, Auclair supports Bertrand in certain recruitment activities.

“He came to spring camp in Lennoxville where he played his college years and he was at the CNDF game two weeks ago, Bertrand said. We like it when he's near us. »

Speaking of recruitment, the Rouge et Or will present to the crowd during the match against Concordia the first players who are committed in anticipation of the next season.