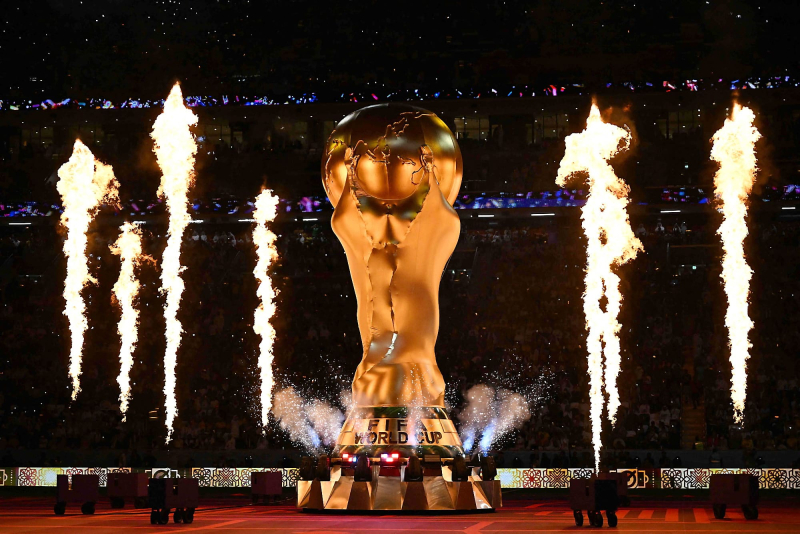 DOHA, Qatar | After all these months of waiting and preparation, here we are finally in Qatar for this 2022 World Cup, the first held in an Arab country.

The tournament was launched on Sunday evening by a game between Qatar and Ecuador at the spectacular Al-Bayt Stadium, which depicts a Bedouin tent that stands in the desert.

The official mascot, La'eeb, floated above the crowd.

The tournament begins against all odds, in a context where Qatar is denounced for the non-respect of human rights, for its laws which aim to imprison homosexuals, as well as for the thousands of presumed deaths among migrant workers and related to the construction of the various infrastructures necessary for the presentation of the event that will animate Doha for the next month.

And above all, the tournament begins despite an hour-long speech for the less absurd of the president of FIFA. Gianni Infantino praised Qatar and put the West and especially Europe on trial on Saturday.

Infantino was accompanied by Sheikh Tamim bin Hamad Al-Thani, Emir of Qatar, for the opening match on Sunday.

The controversies left their mark and some stars chose not to participate in the opening ceremony.

This is the case of Rod Stewart who would have declined a check for more than a million dollars. Dua Lipa also refused to participate, preferring to watch the tournament from home.

What's more, the tournament is taking place in a context where FIFA is in the hot seat because of its ways of do very dubious. A series recently launched on Netflix, FIFA Uncovered, puts the spotlight on the federation and the rampant corruption that affects it.

In particular, it is about bribes involving Qatar's candidacy which was granted in 2010, at the same time as the 2018 tournament was awarded to Russia.

When we arrived at the Al-Bayt stadium before the opening match, we had the opportunity to meet a few supporters there and opinions were divided.

Luis, an Ecuadorian, chose to give the runner a chance before passing judgement.

“I came here to celebrate football and to soak up the Cup atmosphere. of the world. I want to see how they treat people before judging them. »

Mark, an Englishman who was looking for tickets, is more cautious in his assessment.

“I am here knowingly and I have to moderate my conscience when you know everything you can fault them, but so far things are going well and people are nice. This is a step in the right direction. »

There have been a few hiccups in recent days, such as this American journalist who was told to remove a face covering in the colors of Pride during a training session with the United States. And this Danish film crew who was royally annoyed by security during a shoot with threats of breaking the camera as a result.

But overall, we can see that the Qataris are welcoming and speak more than correct English, which facilitates communication.

In the stadium where 67,372 spectators crowded, the atmosphere was festive. The opening ceremony of about thirty minutes, quite sober, gave a nod to the past.

Fireworks illuminated the city of Doha during the ceremony.

Ecuador won by the score of 2 to 0 against the Qatar in the opening match of the World Cup.

Because we also have to talk about football, we had an interesting curtain-raiser match. Qatar became the first hosts of a World Cup to lose their opener, in a 2-0 loss.

It all started with a tight offside that deprived Ecuador of a goal from the 3rd minute. The Ecuadorians scored on a penalty from Enner Valencia in the 16th. He then added another in the 31st.

And we can tell you that there were a lot fewer people in the stadium in the second half. Meanwhile, Ecuadorian supporters chanted “queremos cerveza“, meaning “we want beer”.