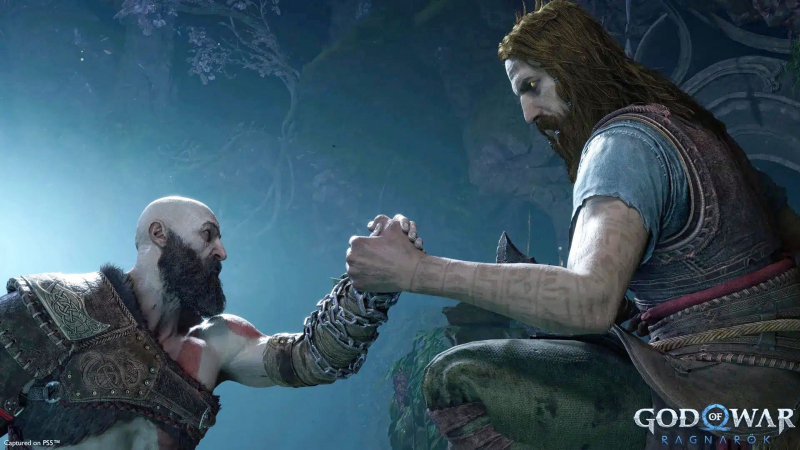 Kratos is back. And he's in phenomenal shape. The Greek god begins his most perilous mission yet inGod of War: Ragnarök, an exhilarating adventure game, brutal and all in all practically perfect.

Waiting, this God of War: Ragnarök? Oh yeah ! Some would even go so far as to claim that it is the most anticipated game of the year. And they wouldn't be wrong; after all, its predecessor, launched in 2018, breathed new life into the popular saga that began 13 years earlier.

Here we pick up (almost) exactly where the previous chapter ended. Three years may have passed since the events of God of War, we find our hero and his son Atreus still suffering Freya's wrath, after they killed his son Baldur.

Avoid the end of the world

It is therefore with a feeling of déjà vu (not necessarily unpleasant, all the same) that this new adventure begins, bringing the player in familiar places, populated by characters who are just as familiar. But this feeling of repetition is only ephemeral. Because we quickly realize that even if it uses the same springboard as before, God of War: Ragnarökis determined to propel us into a very singular universe, with a new plot of tenfold proportions.

Kratos and his son Atreus must here cross the nine worlds of Yggdrasil to try to defuse Ragnarök , that series of prophetic events in Norse mythology leading to the end of the world. Nothing less.

This time around, the stakes are obviously very different. Just like the dynamic between Kratos and Atreus. Because the one who was a puny kid the last time we met him is now a rebellious, seasoned and powerful teenager. His contribution to the fights is greater and better managed by the artificial intelligence that pulls the strings.

The relationship with his father – tense, let’s say – also becomes deeper and more complex, fleshing out more the plot and the dialogues. Because like the previous chapter, God of War: Ragnarök is an inevitably talkative game.

And that's good. Because it rubs shoulders with Nordic mythology, a world as vast as it is dense, requiring context and explanation for the player to fully grasp its subtleties. This is also executed with great skill, over a gripping and particularly well-crafted plot, without ever becoming didactic.

But the sinews of war, the very foundation of God of War, remains without a doubt its breathless, dynamic and exhilarating battles. It's still just as brutal, of course, the hemoglobin flowing freely, generously poured as much on the sand as on the snow.

They are however a tad more fluid with revised and refined attacks, offering instinctive and satisfying handling.

These fights will also be more immersive for owners of PlayStation 5 (console on which this test was carried out) since God of War: Ragnarök takes full advantage of technological advances. Haptic feedback and adaptive triggers, in addition to 3D sound, therefore enhance the experience by several notches.

God of War: Ragnarök therefore instantly establishes itself as a essential for any fan of the genre. Will it be game of the year? Only the future will tell us. But he's clearly in a good position to finish 2022 number one.