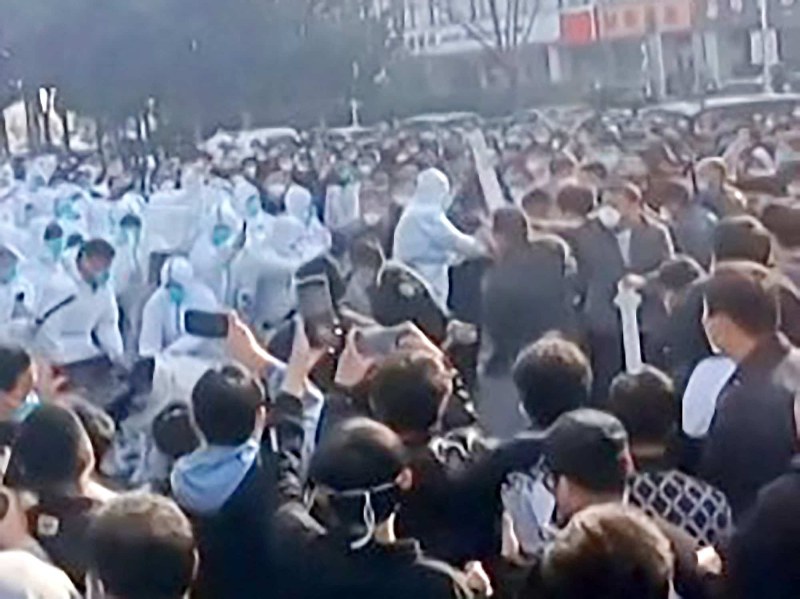 Police harshly suppressed a protest by workers at the world's largest iPhone factory in China. Apple's phones might be late for Christmas.

The iPhone you want to buy for Christmas might have cost a Chinese worker a beating.&nbsp ;

Chinese police, all dressed in protective suits against the risk of contamination by pathogens, did not go to any lengths during a recent demonstration by workers at the gigantic Foxconn factory in Zhengzhou. They dispersed the protesters by generously beating them with truncheons and iron bars.

On Thursday, several videos circulated on social media showing around 100 workers clashing with law enforcement, some of whom were dressed in white hazmat suits. The latter kicked and hit demonstrators with truncheons and metal rods. Some workers allegedly threw bottles and barriers at the officers.

Workers at the Foxconn plant ( an Apple contractor) in Zhengzhou are complaining that Foxconn has changed the wage terms that were first offered to lure them. They also claimed Foxconn coerced them into sharing dormitories with colleagues who tested positive for COVID-19.

In order to maintain iPhone production ahead of the holidays despite rising COVID-19 cases, the company had to confine the site, in conditions denounced as “chaotic” by employees who were numerous to flee factory. Foxconn also had to quickly hire tens of thousands of employees.

Employees of Foxconn, in Shenzhen, in the south of China. Foxconn is the world's largest electronics supplier. In addition to Apple, it also receives orders from Sony, Dell and a host of other industry companies large and small.

According to AFP, the protests erupted when the new recruits, who had signed a contract that they would receive 3,000 yuan (C$560) in bonuses, suddenly saw that figure reduced to 30 yuan. Foxconn assured Thursday that it was only a “technical error” in its payment system, promising that it would be fixed.

Foxconn issued an apology on Thursday and said it wanted to compensate workers beaten by police during the protests. The company also bought peace by offering several employees bonuses of 10,000 yuan (1,340 euros) in exchange for the end of their contract and their immediate departure from the site, according to AFP.

Chinese police, all dressed in protective suits against the risk of contamination by pathogens, did not go to any lengths during a recent demonstration by workers at the gigantic Foxconn factory in Zhengzhou. They dispersed the protesters by generously beating them with truncheons and iron bars.

This is not the first time that the main subcontractor has been blamed for its poor working conditions. It will be remembered that in 2010, a wave of suicides in the group's factories made the headlines.

Could these events lead consumers to boycott Apple?

According to Michelle Blanc, it is the Chinese government, rather than Apple, that is suffering from an image problem at the moment.

“Government is seen as the cause of the problem. It is he who is cracking down on his population at the moment, including those who work at the factory. »

What is iPhone City?

Zhengzhou, a huge industrial city in eastern China, also has a more informal: iPhone City. According to the Wall Street Journal, in this city of six million people in an impoverished region of China, the local government paid $1.5 billion to Foxconn in 2017, Apple's main iPhone supplier .

The money is being used, in part, to improve local infrastructure, reduce Foxconn's export costs and build housing for the plant's approximately 200,000 employees.

An iPhone shortage at Christmas?

Difficulties at the Zhengzhou factory could make it difficult to ship devices to several countries for the holiday season. Apple has already warned that it will ship fewer devices overseas in the coming weeks. Already, delays have been reported for the new iPhone 14 Pro and 14 Pro Max, according to Global News.

“The fundamental question you need to ask yourself is: do you need to change your iPhone? – Michelle Blanc

Michelle Blanc is an expert in e-commerce. And according to her, it's better to endure your old phone than to chase after the new one.

“Apple has had supply problems for a while because of COVID, like all other companies, Besides. I needed a power cable myself and it took me three months to get it! “, she says. Just about everyone's supply chain is affected.

The maker of iPhones and other gadgets is a giant in the electronics industry.

Foxconn, also known as Hon Hai Precision Industry Co., is the world's largest electronics supplier. electronics, with factories all over mainland China. It is best known for making iPhones and other Apple devices, but its long list of customers includes Sony Corp., Dell Inc. and BlackBerry Ltd.