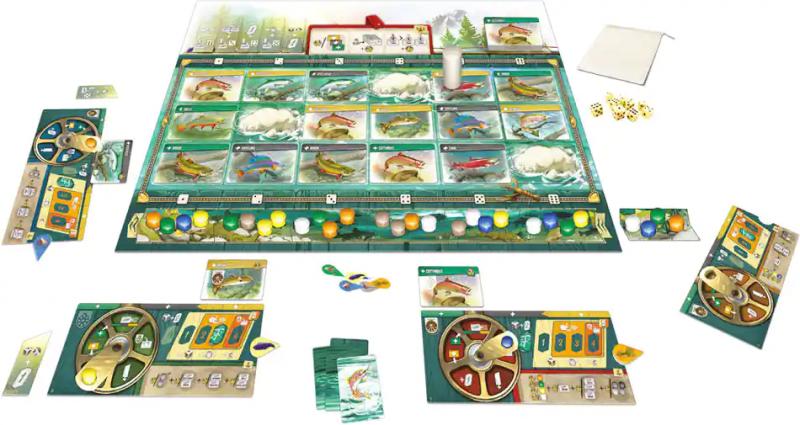 We opt for zenitude with an hour spent with our feet in the river. But you also have to think about wildlife conservation, which our second selection will do. We then go to the edge of the universe in a galactic adventure of the fastest.

You can't say that board games with fishing for theme run the streets. It therefore stands out from the start. And its different mechanics allow it to hit the mark.

On the edge of the river, you will have to try to capture fish and then lure them into the boat.

We find a central board which represents the river, this one is filled with cards on which appear fish and, at the bottom, tiles with larvae which will move over the sleeves to simulate the life which is in constant movement in the river.

It is basically a game where you choose dice since for each action, you will have to take one. To make a roll, take a die and place the throwing pawn in the column corresponding to the number of the selected die.

To know if the capture was successful, you will have to draw a card from the “shoe” deck. The throw failed? We can do it two more times and on each occasion, we will draw two cards rather than one. There is also an app that can do this to replace cards.

And every time you cast again after a failed attempt, the casting pawn has to drift to the left, so you may not be able to catch the coveted fish. Also note that to be able to cast, the selected column must have a larva of the same color as the fly attached to your line at the bottom.

Once the fish is hooked, you place it at the bottom. above your personal board. Then you have to grind. To do this, you must deduct the strength indicated on the fish card from the value of the chosen die. There is a reel with actions on each player's board.

The fish are grouped into three colors, these determine their strength and the time it will take to attract them to you in order to capture them.

There are also several effects to enhance your actions. You just need to calculate well. What's more, there are bonuses that will allow you to get points at the end of the game.

This is an excellent fishing simulation with simple and easy to understand rules. It's very zen, but still competitive.

Another theme focused on nature, but on preservation this time. In this cooperative game, your objective will be to ensure the survival of one of the three species available, the tiger, the panda or the sea otter.

Your role, to try to convince ambassadors to vote for your project before it's too late.

Depending on the chosen scenario (and there are additional difficulty levels), you will place the animals on the game board. The players will take turns rolling their three dice and performing actions by placing the dice on cards that allow them a wide range of options and there will be more and more as cards are played.

In addition, it is important to communicate well since each map has three slots to put a die on, but you must always play a stronger die than those already on it.

Your objective will therefore be to place vote cubes on the ambassadors when they are revealed, but also to counter the effects of deforestation which makes the territory of the animals shrink like a trickle.

After everyone's turn, a couple can give birth if the die plays in your favor. We will also roll a dice to place a new deforestation tile and, finally, we will draw an impact card which will certainly thwart your plans.

It's a race against time since each round is a year and that, depending on the number of players, we will have a certain number of years to reach the goal.

A very fun and simple way to initiate the youngest

Here is a game where you draw on a sheet. It's quite fun and above all very fast.

There is a small central board where geometric shapes made up of hexagons are associated with objectives that will make you score points at the end of the game.

During his turn, the player will use a module that he will place around the edge of the board to determine which shape he will have to draw and which shape will be intended for the other players.

Drawing , you will have to try to cover the aliens of your sheet to avoid end-game penalties in addition to covering improvements that will allow you to alter the forms if necessary.

Also aim for the borders, which are at the ends and which are worth a lot of points.

A game only lasts three rounds, so you have to choose the layout of your shapes and those of your opponents.

It's really simple and super fast. Two, we get out of it in 15 minutes.