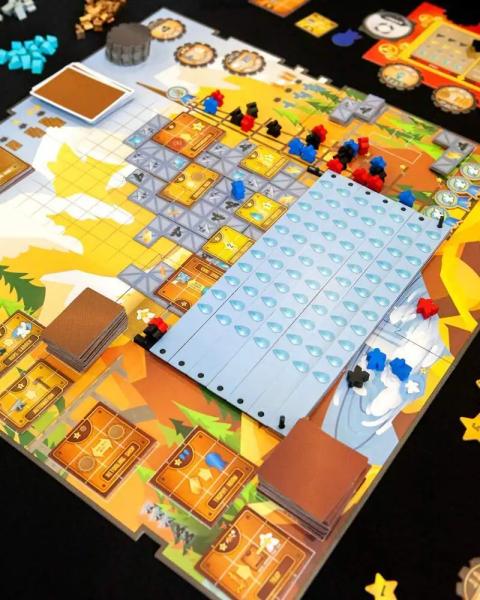 There are those games whose box is not representative of the little treasure it conceals. Whistle Mountain is of this type. A game of a beautiful playful quality hidden under a box that is a little too generic. We invite you to go further to discover a beautiful nugget.

In this game which admirably combines worker placement, resource management and tile laying, you are in a mine where you will have to make the most of the resources in order to collect as many points as possible.

We discover a large plateau at the heart of which is the mine. On the left side of it, there are the barracks where your workers are piled up. They will have to move around the mine and find their way to the right where they will score you points at the end of the game. >

It's not these workers that you'll put down, but rather “steampunk” flying machines that will go into notches around the board to harvest resources. These will be used to buy machines, structural parts to improve the mine or even upgrades for your personal board that will make you more efficient in your tricks.

The main idea of ​​the game is to build the frame of the mine to advance it and to put machines that are small, medium or large.

When you land one of your hovercraft in an open space in the mine or on a machine therein, you can harvest any resources adjacent to your hovercraft. It is therefore important to place its elements carefully.

When a machine is placed, if it covers workers, they are moved in a ladder to the right which will earn points at the end of the game and which contains a privilege for each first pawn to reach a new row.

Super ingenious detail, once a certain line is exceeded during the construction of the mine, the water level will start to rise by adding removable strips that will cover the machines. These will become unusable and the workers being overwhelmed will find themselves in a whirlwind and you will have to save them, otherwise each will cause you to lose points at the end of the game. This ends when there are no more workers in the barracks.

Seemingly complex, the game is very easy to learn and the game quickly becomes fluid from the second part.

It's the equinox and the storybook creatures use their magical powers in a little competition. In this auction game, you will have to determine which characters will still be in the race at the end of the game.

The game is divided into rounds which are themselves separated into rounds. The creatures, in the form of cards, are spread out in the center of the table in a row.

On your turn, you will have to play a card from your hand which will end up in a column under the creature that will correspond to it and on the line of the current round.

The cards have an associated strength and this will determine the fate of the creature at the end of the round. The higher it is, the more likely it is to remain in play. It is also possible to place a card on a creature already in play.

The round continues until there is one card in each column. We will then check if a creature is eliminated after each round. This happens when a creature has the lowest value without a tie. Otherwise, the rounds are chained as long as there is a tie.

But how do we make points? As creatures are eliminated during each round, it is those that remain in play at the end of the game that will allow players to score points.

And they will be able, at the start of each round , bet on a creature with a token of its color on a creature. The earlier you bet, the more points you will score. It is therefore scalable, which makes the game very fluid because everyone can bet on different creatures at any time during the game.

Be prepared to do a little math to get the best part, especially since it's possible to control creatures that will grant you powers.

Carpenters of the North Sea

We told you about Shem Phillips in our last column. This New Zealand author loves trilogies and here is a piece from his first that focuses on the Vikings and the North Sea.

Players compete to build the larger fleet. To do this, they will have to collect oak, wool and iron, in addition to surrounding themselves with craftsmen. And gold will have to be used sparingly and at the right time.

Your goal is obviously to have the most victory points at the end of the game and to achieve this you are going to have to build a variety of buildings and ships. The end of the game will be triggered as soon as a player builds a fourth ship.

Building is done in exchange for resources and with the help of artisans (cards).

< p>Of course, your opponents may interfere with your progress and thus force you to review your entire strategy.

A rather family game with a theme that will appeal to the youngest. Perfect for introducing them to a slightly higher level of difficulty.