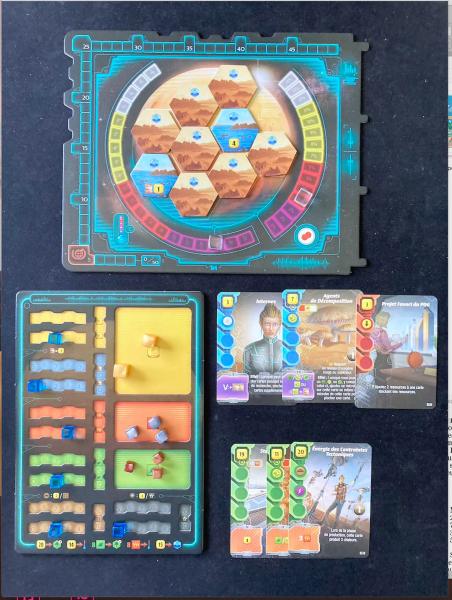 Games where you have to build an engine to become more efficient as the game progresses are popular, and with good reason. They push you to always be even better from one game to the next.

We offer two games that revolve around this mechanic, including one that will allow you to get used to it. familiarize easily. We add a cooperative game, and everyone will be satisfied!

If Expedition Ares interests you, but you have doubts about your ability to assimilate its rules and subtleties, this Minivilles is for you.

It is the same principle since you have to build an engine to become more and more efficient.

Players must build their city from two cards. They will be able to improve it by buying supplies at a public market which always offers nine different buildings.

And how does it work? The cards correspond to numbers from 1 to 14. At the start of his turn, the active player rolls one or two dice and the result will determine which cards will be activated.

The objective is obviously to collect money to obtain new cards and to build one of its six monuments, since to win, you must be the first player to have five monuments built. This is a very simplified version of the so-called engine building games which will allow everyone to learn the principle, whether you are young or older.

Good quality of the game , it is very fast and it rolls well, regardless of the number of players, even if some cards are more attractive when there are several around the table.

Terraforming Mars is one of the greatest hits of recent years in the gaming world of society. We propose here a slightly simplified version, but far from being simplistic.

On a collective level, players embody businesses whose goal is to make Mars livable for the human race. You have to terraform the red planet by adding oceans to it, raising the temperature and raising the level of oxygen by adding forests.

We therefore take up the idea of ​​the original game here, but by simplifying the mechanics a bit. We introduce the concept of game phases. Thus, at the beginning of each round, the players will all reveal a card indicating which of the five game phases they wish to activate and all the players will be able to perform the actions associated with each of the chosen phases with a small bonus for the player who chooses it.

This is a card game where you will spend money (megacredits) to add cards to your board to develop your engine. Because the idea is to collect resources (money, heat, plants) to transform them, on the small common plateau, into oxygen, a rise in temperature or the ocean.

< p>The more the game progresses, the more efficient your engine will become and your production will be enhanced.

The idea of ​​game phases speeds up the flow of the game and adds an important and interesting strategic element to it.

There are a lot of cards and it will take you several games to find effective combinations because that's the essence of the game, finding combinations of cards that will improve your production faster.

It may seem difficult at first sight, but we assure you that once the game starts, the game rolls on its own thanks to its fluid mechanics, and you enter the game faster than in the original version.

Teens find a mysterious game at a yard sale and by playing it, they discover connections to their lives.

In this cooperative game, you lead the investigation by going there from strategies and deductions to decode a new answer during each investigation.

The game unfolds on a double-sided board that will be different at the beginning of each new mission.

Because this is a game that evolves and improves as you your investigation is progressing. The level of difficulty will obviously increase and that's what's interesting.

The game also revolves around a comic strip that serves as a common thread between each mission.

The investigation takes place by turning over tiles which will either reveal symbols which will allow you to decode the message or pitfalls which will complicate your life.

You only have one chance to find the correct answer. If you mess up, you'll have to start over. So work together and be sure of your shot.

There is an element of repetition in the flow of the game, but for the youngest, this is what will ensure that they s will feel comfortable there and will quickly understand the mechanics.