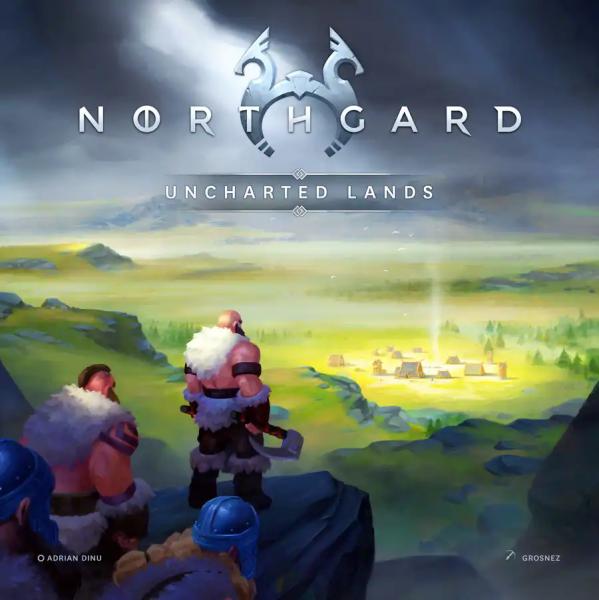 Feel like conquering something? We have solutions for you. A game where conquest is at the center of the strategy and two others where you make small gains while thinking about the end of the game.

And the best part of all that , is that in all three cases, you will not spend hours assimilating rules. You'll learn all this pretty quickly.

This artwork inspired by a popular video game should appeal to fans of territory conquest games in the genre of Risk and Small World .

First of all, we have very nice material with mini plastic figurines, richly illustrated cards and high quality cardboard tiles and tokens.

Beneath the complex airs however hides a game simple to understand and whose rules are rather easy to assimilate. Players embody Vikings whose objective is to dominate by being the first to control three closed territories with a large building or to have the most glory points at the end of the seven years that a game lasts.

There are therefore seven rounds of play which are divided into five phases. During these, you will first play cards to perform actions that will allow you to accentuate your presence on the game board or even to build buildings or even to enlarge the playing surface since the tray is modular.

Indeed, it comes in the form of beautiful large tiles that are added as the game progresses. And this is interesting because there is a very pronounced strategic aspect in the way of placing a new tile.

In addition, by moving, you will be able to provoke fights which will be settled thanks to your strength points by the number of units you move, but also by the die. We therefore keep a traditional aspect while keeping chance.

You will also have to collect resources in order to be able to build your buildings in addition to feeding your units when winter arrives. It also includes elements of deck buildingsince at the end of each year, players will be able to add a new card to their deck.

There is very little downtime in the game and even before the end of the first round (year) , you will be comfortable with the rules and their little subtleties. What's more, each player embodies a different clan that has its own particularities. This asymmetry makes the games even more interesting.

This is a game that is likely to be released often.

This one is fits nicely in a bag for the holidays. This is a fast game where you will have to try to score as many points as possible by playing your betta cards well on the displays in the middle of the table.

Each player is assigned a fish color and must then make arrangements according to configurations that will give a variable number of points.

The cards are square and are in a nine-by-nine format. What is unique is that they are all punctured in various ways. You can thus play on all the cards already placed, as long as the aquarium is not full.

You will then have to orient your card in such a way as to create a geometric shape which is associated with a number of points .

As much to tell you right away, it's a nice puzzle, especially since everyone is playing on the cards and an opponent can quickly derail your plans.

You will therefore score points over the rounds, but also at the end of the game according to the number of fish of your color still visible on each display.

We stay on the same principle as Betta, except that we find ourselves in a souk in Marrakech where the players are carpet sellers.

The game takes place on a square board filled with squares. We place in its center Assam, a character who will determine your movements.

At the beginning of your turn, you will decide if Assam will go straight, left or right. You will then roll a dice and your move will depend on the number of slippers visible on the dice.

You will move to then place a small rug on one of the squares adjacent to Assam.

But be careful, if you fall on an opponent's carpet, you will pay a tithe to your opponent which will be equivalent to the number of squares that make up his group of carpets.

When you place one of your carpets , you can cover part of a stack, whether it is yours or an opponent's. But think about it carefully because at the end of the game, you will make points according to the visible number of your carpets.

It is therefore a very simple game, but also very strategic where it is you have to think carefully about your movements, place your stacks well and manage the risk of the dice well.

A classic that never goes out of style, but which has just been entitled to a beautiful reissue.