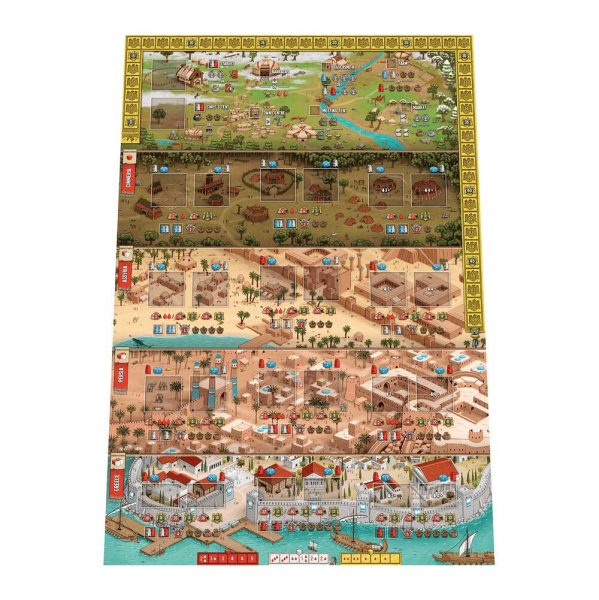 It's the season for cycling tours, we're offering you a very different one that will be less breathless and much funnier. But you can also have fun with camels or even looters who terrorize the Middle East. Ride with us

Designer Bruno Cathala is a keen cyclist and he has decided to transpose his passion into this simple little game that offers a great gaming experience.

In this card game, you take part in a bicycle race where the riders are pretty and funny animals.

The objective is to get rid of the cards in your hand as quickly as possible in order to score as many points as possible. Unsurprisingly, the player with the most points at the end of the game will be crowned the big winner of this cycling tour.

In each of the five rounds, players will start with 11 cards in hand. These are numbered and come in several different colors. Some, which are not part of any color family, are stronger. They are called fighters.

It's actually a trick-or-treating game. That is to say, a player will place a card in the center of the table and the next one will have to outbid. To do this, he can play one or more cards.

If it is impossible to play a card of higher value, it will be necessary to play a combination of cards which will be either of the same value or of the same color. This is where you have to calculate a bit. The value of a combination is calculated according to the number of cards played, multiplied by ten and added the value of the lowest card, which gives the new total to beat.

For example, a player does not have a seven to beat a six. He will play a two and a three of the same suit. Two cards therefore give 20 to which we add the value of the weakest card which is two. The new number to beat is therefore 22.

This continues until all players pass. The player who wins the hand then launches a new offensive. This continues until one player has no more cards and wins the round. Here too, you have to calculate a little. He scores as many points as the current round (1, 2, 3, 4 or 5) multiplied by the number of players still in contention. The other players will continue in the same way until no one has any more points.

From the second round, the player in the lead collects the carrot polka dot jersey which will allow him to add ten points to a total during the round. At the end of the game, we add up all the points scored to find the winner.

This is a competitive and very easy to learn game that will really amuse everyone, even non-gamers.

Camel Up Off Season

In Camel Up, you take part in a completely crazy camel race.

In Off Season, we meet during the off season and we discover what the camels do during this break.

Rather than race, you will instead accumulate resources on the backs of your camels. But be careful, if they have too much to carry, they will get tired and they will lose their load.

The game is divided into three phases, the auction, the market and the sale.

During the bidding phase, players will bet to determine who can go first.

During the market phase, players will have to choose one of the available markets in the center of the table where they can collect coins. resources. These will be placed on the backs of your camels.

But be careful, a camel can only carry one type of resource and some of them will be face down, so you will have the surprise by flipping the card.

During the sell phase, players will be able to sell the accumulated goods on only one of their camels. The resources all have different values.

This continues until all the resource cards have been dealt. The player with the most money will win.

It's simple, just as crazy as the original game and very fun.

In fact, it's a replay of the original with tweaks that make the gaming experience even smoother.

The game board is divided into five different regions which offer different possibilities and a progressive degree of difficulty. And some places will require a worker of a specific color.

Players also have cards they can play in order to become stronger and above all more efficient during their looting.

< p>This is a great way to enter the world of worker pose games since the game mechanics are simple, the choices are not very complex and the turns are fast.