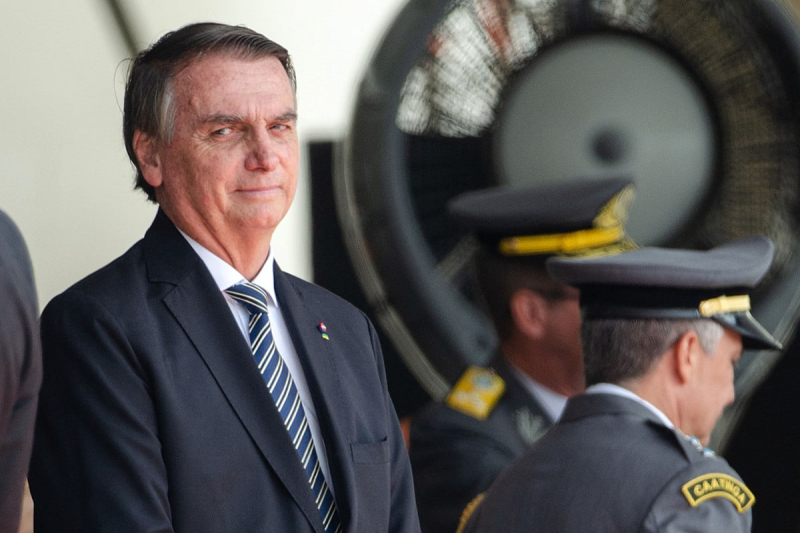 Far-right President Jair Bolsonaro left Brazil for the United States on Friday, two days before the end of his term and the enthronement of his hated leftist successor Lula in Brasilia, reported multiple media.

Bolsonaro, who has never congratulated Luiz Inácio Lula da Silva for his victory, should therefore not be present on Sunday at the investiture ceremonies in Brasilia of the new president, whom he had to gird with the presidential sash, as the protocol.

Questioned by AFP, the presidency did not wish to confirm this information.

The vice-president, Hamilton Mourao, is acting as president and will a speech on Saturday evening, announced the national radio RNR.

'I'm in the air, I'll be back soon,' the far-right head of state told CNN Brasil .

A procession of presidential cars left the grounds of the official residence of Alvorada in Brasilia, noted an AFP photographer, without being able to confirm that Bolsonaro was in one of the vehicles.

The general secretariat of the presidency has authorized the departure from the territory of members of the personnel responsible for the security of the “future ex-president” for a trip to Miami “from January 1 to 30, 2023”, according to the Friday's official journal.

It should be the first time since 1985 that an outgoing Brazilian president decides not to gird his successor with the presidential sash.

That year, the last president of the military dictatorship established in 1964, General Joao Figueiredo, refused to take part in the investiture ceremony of his successor, José Sarney.

Since the narrow victory of Lula, his sworn enemy, on October 30, Jair Bolsonaro lived almost as a recluse in Brasilia and locked himself in silence, showing various signs of depression.

For Créomar de Souza, founder of the consulting firm Dharma, Bolsonaro's departure to the United States takes on the aspects of “an escape”, but also of “a denial of reality”.

“But it is also an attempt to delegitimize the result [of the election] and the next government,” adds the analyst.

Earlier in the day, the Brazilian president said goodbye to his supporters, speaking for the first time since his election defeat on social media – where he had been ubiquitous for four years – and wiping away a few tears. &nbsp ;

“The world is not going to stop turning on January 1st […]. We have a great future ahead of us,” Bolsonaro said. “We lose battles, but we don't lose the war.”

He spoke directly to his faithful, who continue to camp in front of the barracks or the army headquarters in Brasilia and in other cities to request military intervention to prevent Lula from taking office.

“I never thought I would get this far,” the incumbent president said through tears, before declaring, “At least we delayed Brazil's collapse for four years with this nefarious leftist ideology.”

“I gave the best of myself”, continued Jair Bolsonaro, whose majority of analysts consider the balance sheet of the mandate as very bad.

In front of his residence official of the Palace of Dawn, demonstrators who followed the live transmission shouted “coward!”, “shame!”.

The president for the first time condemned an attempted attack by the one of his supporters, who planted an explosive device in a tanker truck near the Brasilia airport to “create chaos” before Lula's enthronement.

“There is no justification for this attempt to terrorism”, he said, without however condemning the encampments of his supporters in front of army headquarters, which pose a threat to the progress of the investiture for the her security has been enhanced.