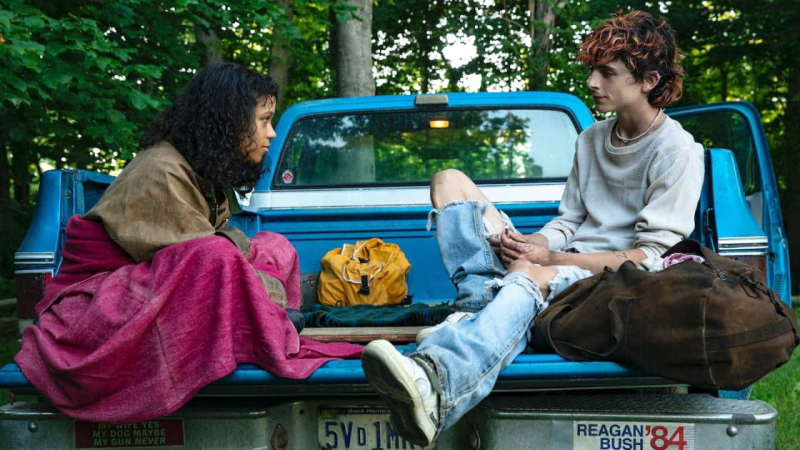 After “Call me by your name”, Luca Guadagnino reunited with Timothée Chalamet for the filming of this fable of wandering against a backdrop of cannibalism. Interview with the filmmaker of symbolism and love.

However, the Franco-American actor who will soon be found in the second part of “Dune” by Denis Villeneuve is a secondary character in “Bones and All” even if, for the first time, he is also a producer. The main one is Maren, masterfully embodied by Taylor Russell. Abandoned by her mother (Chloë Sevigny) when she was just a child, she is also abandoned by her father (André Holland) now that she is a teenager in this America of the 1980s.

< p>Maren is cannibalistic and cannot curb her instincts for long. Since her father is gone, she jumps on a bus with the sole motivation of finding her mother. Along the way, she meets Sully (Mark Rylance), a cannibal like her who teaches her the basics of an existence on the fringes of society. Then, with Lee (Timothée Chalamet), she discovers love.

“A good screenplay is a launching pad on which you can put your ideas into motion to do something with them,” said Luca Guadagnino during an interview with QMI Agency when talking about the film adaptation of Camille DeAngelis' novel. by David Kajganich. The screenplay contained these very beautiful, heartbreaking characters due to the very impossibility of their existence. They are driven by their need for contact, their need for a kind of normality when they are different and their very condition condemns them.”

“Timothée and Taylor bring to their characters a greater sense of the possible in their impossibility: they could find love, they could find a contact that would take them – conditionally – out of their condition. This possibility was beautiful to see,” said the filmmaker.

“Bones and All” is also a “road movie” vaguely set in the 1980s – we notice the era in a diffuse way, randomly from certain clothes or accessories.

“Maren only has $75 in her pocket, an audio tape of her father telling her what he thinks she is, and her birth certificate. Her quest for a mother from the beginning turns into a quest for love. In all adventures, we know the starting point, but not the arrival point.

“And she meets this woman [Editor’s note: her mother] who has chosen to solve her impossibility of existing by locking herself very cruelly in her condition [of cannibal] while loving her daughter to whom she transmitted this state. She thinks the world is not a place for freaks in the same way adults don't let the youth make revolution or make the mistakes associated with it. In this sense [the figure of the mother] is tragic, but she is also superbly embodied by Chloë.”

The wandering or nomadism to which Maren is condemned is undoubtedly a parable, as detailed by Luca Guadagnino, who was shooting his very first film here in the United States.

“In my opinion, America is the result of the friction between the individual, individualism and the 'pursuit of happiness' mentioned in the country's Constitution, the need for a strong sense of community, all of which is happening simultaneously under the eye of the Goliath that is neo-liberalism or rather the determinism of capital. When you see [the sticker] “Bush-Reagan” on the screen, you see the explicit pornographic and public face of this capitalism. Generally, America is the triumph of capitalism. So I'm not sentimental about the origins of the characters, but rather about the ideological issues. I can find tragedy in beauty everywhere…including the world of Bush and Reagan.”