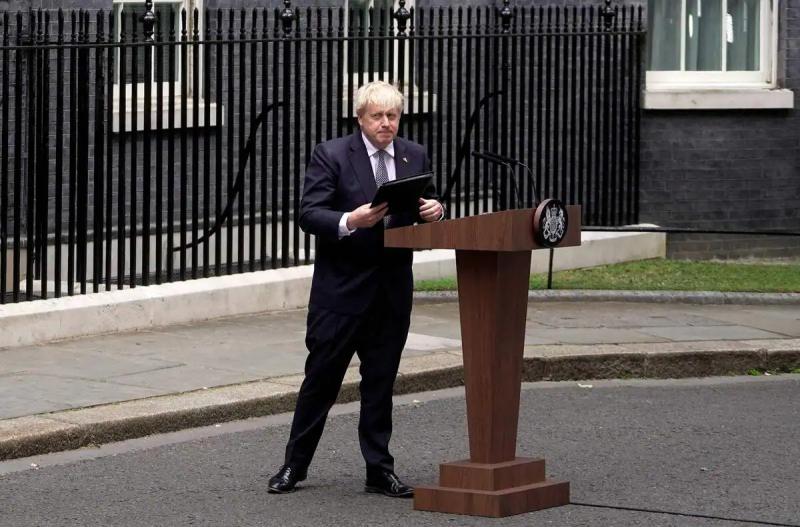 British Prime Minister Boris Johnson, worn down by scandal and weakened by an unprecedented series of resignations, announced his resignation as leader of the Conservative Party on Thursday, paving the way for his replacement as head of government .

“It is clearly the will of the Conservative Party that there is a new leader and therefore a new Prime Minister,” he told a press conference outside Downing Street, saying he was “sad to 'giving up the best job in the world'.

He added that the timetable for the election of a new Conservative leader would be set out next week.

“We have no no need for a change at the head of the Tories. We need a real change of government,” Opposition Leader Keir Starmer argued shortly before, threatening to hold a vote of no confidence in the House if Mr. Johnson remained in power.

< p>Resignations and calls for the departure of Mr Johnson, a turbulent three years marked by repeated scandals, continued on Thursday as Downing Street announced a series of appointments to replace resigning ministers and secretaries of state. /p>

A total of sixty departures have been announced in the government since Tuesday, including five ministers, an exodus of unprecedented speed in British political history.

“Yesterday I begged you to (…) resign in the interest of our party and the country. You have put us in an impossible situation,” new Education Minister Michelle Donelan wrote in her resignation letter, explaining that she had “no other choice.”

“Decent and responsible government is built on honesty, integrity and mutual respect – it is with deep personal regret that I must leave government as I believe these values ​​are no longer upheld,” he said. writes Brandon Lewis, stressing that the “point of no return” had been reached according to him.

Wednesday evening, several ministers had gone to Downing Street to try, in vain, to convince Boris Johnson that, having lost the confidence of the Conservative Party, he should resign, in his interest and that of the country.

The 58-year-old prime minister, who says he has a 'colossal mandate' to fulfil, retaliated by dismissing by telephone on Wednesday evening the minister who had first come to advise him to resign earlier in the day, Michael Gove , in charge of territorial rebalancing. According to the BBC, Downing Street called Michael Gove a 'snake' untrustworthy to Mr Johnson.

All day Wednesday, resignations had succeeded, the conservative party tired of repeated scandals since Boris Johnson, the former hero of Brexit, arrived in Downing Street in 2019. The weekly question session in the House had been particularly stormy for Mr. Johnson, with new calls for resignation in his own camp, laughter testifying to his loss of authority, and a “bye Boris” at the end of the session.

Discontent had been simmering for months, fueled in particular by the scandal of illegal parties in Downing Street during the anti-Covid confinement, when the British had to respect very strict rules.

Boris Johnson, known for not to be a lie, had varied in his explanations, provoking frustration then anger of the elected conservatives, in a country confronted with record inflation of 9% and social movements. His popularity rating had plunged, and nearly 70% of Britons now want him to leave, according to two polls this week.

The resignations on Tuesday evening of Finance Minister Rishi Sunak and Health Minister Sajid Javid, had sounded the hallali for the prime minister, after a new sex scandal involving the deputy “whip”, in charge of the discipline of Tory MPs, whom Mr Johnson had appointed in February, “forgetting” past accusations of the same type .

Mr. Johnson had escaped a vote of no confidence last month, however 40% of Tory MPs refused to give him their confidence.