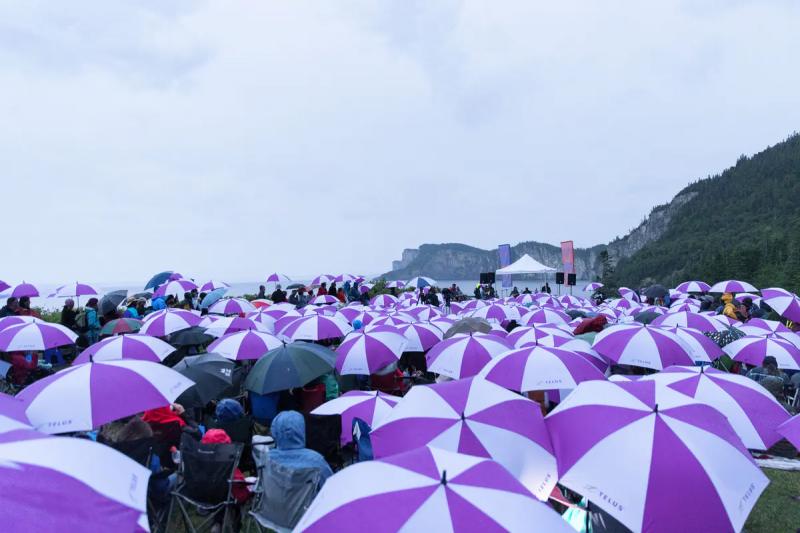 For the past eleven years at the Festival Musique du Bout du Monde (FMBM), the show at the foot of Cap-Bon-Ami, in Forillon Park, has always given way to magical moments and, despite the rain, this year's edition with Malian guitarist Vieux Farka Touré, a show that sold out in 24 hours, was no exception.

“I hope you will have fun soon. We should have done the show another day”, philosophized the one who is nicknamed by critics as the “Hendrix of the Sahara”, in one of his rare stops in Canada. Presenting mostly the works of his most recent album, the virtuoso immersed each member of the public in his universe.

To make it easier to listen in this difficult weather, the organization of the event offered each member of the public a blanket, an umbrella, coffee and pastries for the show. With this paraphernalia, festival-goers had almost forgotten the cluster of droplets while listening to the African artist in the company of his musicians, percussionist Adama Koné and bassist Marshall Henry. “The rain is also a musician who accompanies us,” joked the son of the late Ali Touré.

Although shy, we could see that the crowd seemed to have a lot of fun during the performance. Some even took the risk of getting out of the concon of their umbrella to sketch a few dance steps. By closing your eyes, it was easy to transport yourself to sub-Saharan Africa by the melody of the songs. However, it would have been appreciated to have the history of the few songs in Bambara and Shonghai, such as “Samba Si Kairi” in order to better connect with the trio of artists.

In his few rare interventions with the public, Vieux Farka wanted to thank the organization of the festival for “having gone out of their way” to ensure that his percussionist had his visa to be able to play in Canada. “Many would have let the situation go like this, saying that this story would not be their responsibility, but they did not let us down in this situation, and that is very appreciated”, he underlined, visibly touched by the gesture.

At the end of the show, the trio went to the merchandise booth to greet their audience. The trio is one of the rare artists of the event who took this initiative, an approach that particularly touched the Gaspé public and the many visitors.