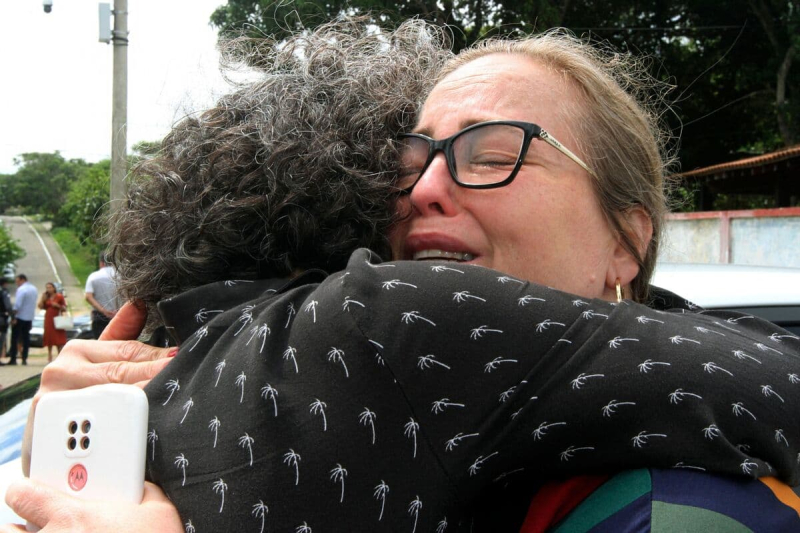 A 16-year-old man wearing a Nazi symbol attacked two schools with a gun on Friday in the state of Espirito Santo (southeastern Brazil), killing at least three people and 11 injured.

The shooting occurred in Aracruz, a city of 100,000 people, about 600 kilometers northeast of Rio de Janeiro. Three teachers and an unspecified student are in serious condition, authorities said.

With his face covered and a swastika on his camouflage clothing, the assailant broke into Primo Bitti School, a public primary and secondary school he had left in June, according to investigators.

After going through the gate at the back of the school, he went to the staff room and opened fire on several teachers, killing two people and injuring nine others, authorities said.

CCTV footage released by the media shows the young man entering the school with a gun in hand, while several people flee in his wake. We see him firing a few shots, without stopping.

He then went, not far from there, at the Praia de Coqueiral Education Center, a private school, where he killed a teenage girl and injured two people, before being arrested by the police.

“He had no specific target” when he opened fire, Civil Police Commissioner Joao Francisco Filho told a press conference, but he had been planning the attack for “two years”, at his words.

The two weapons he used belong to his father, a policeman, and one of them was the the latter's service weapon, authorities said. They are investigating whether the young man, who was under “psychiatric treatment”, had links with one or more extremist groups.

He was arrested at his home a few hours after the incident and, with the cooperation of his parents, surrendered without offering resistance.

The mayor of Aracruz, Luis Carlos Coutinho, had initially told CBN radio that there were two assailants.

President-elect Luiz Inacio Lula da Silva called the killing an “absurd tragedy” on Twitter. “I express my solidarity with the relatives of the victims and I support the governor for an investigation,” said the left-wing leader who will take office on January 1.

Lula campaigned against the spectacular explosion permits to possess and carry firearms under outgoing far-right President Jair Bolsonaro since January 2019.

“The last four years are the ones in which we have seen the most attacks in schools, at least since the early 2000s,” Bruno Langeani, project manager at the Instituto Sou da Paz, told AFP. “We are convinced that the better access to weapons in recent years under the Bolsonaro government has facilitated these types of attacks,” he added.

According to the Brazilian NGO Forum for Public Security, there are approximately 4.4 million guns in private possession in this country of 215 million people.

The shootings in the However, schools remain relatively rare in Brazil, a huge yet violent country.

The deadliest took place on April 7, 2011, when a 24-year-old man opened fire in his former school in the western suburbs of Rio de Janeiro, killing 12 students, before committing suicide.

More recently, on March 13, 2019, two former students shot and killed eight people and injured 11 others before killing themselves in a Suzano College, in the Sao Paulo region.