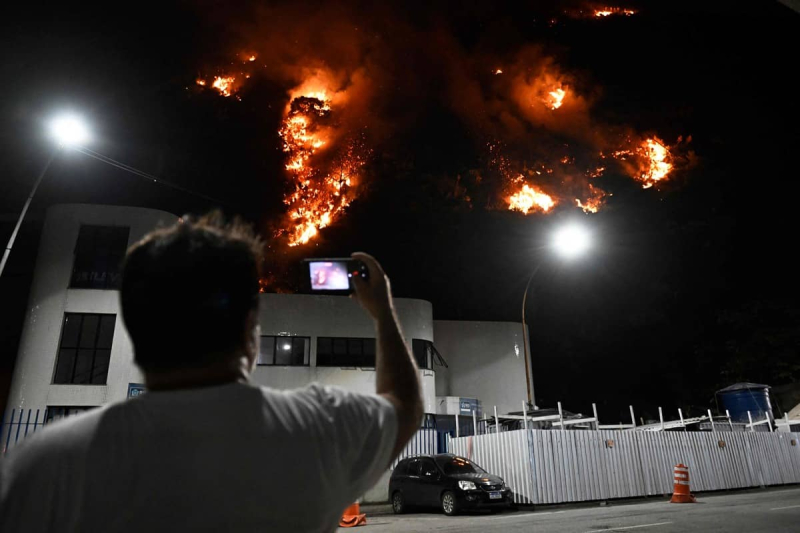 Firefighters in Rio de Janeiro were trying to contain a wildfire on Friday on one of the hills surrounding the tourist district of Copacabana, where no injuries have been reported so far.

The fire broke out around 6 p.m. local time (9 p.m. GMT) on Morro dos Cabritos, a massif made up of rocks and vegetation located between Copacabana and the Rodrigo de Freitas lagoon , in the tourist region of southern Rio, near the beach.

The flames, which according to the local press were visible from other neighborhoods like Ipanema, did not affect inhabited areas, but only vegetation, a spokesperson for the fire department told AFP.

A large fire broke out near buildings in Copacabana, a neighborhood in Rio de Janeiro, Brazil on Friday, according to local news reports. pic.twitter.com/1ENm9dVHFE

From a street at the foot of the hill, at the exit of one of the Copacabana tunnels, several hearths consuming trees and bushes growing on the rocky surface were visible, an AFP photographer noted.

At least three brigades were deployed to the site to try to contain the fire, the cause of which is still under investigation.

In 2010, four hectares of Morro dos Cabritos went up in smoke after a fire caused by the fall of a sky lantern.