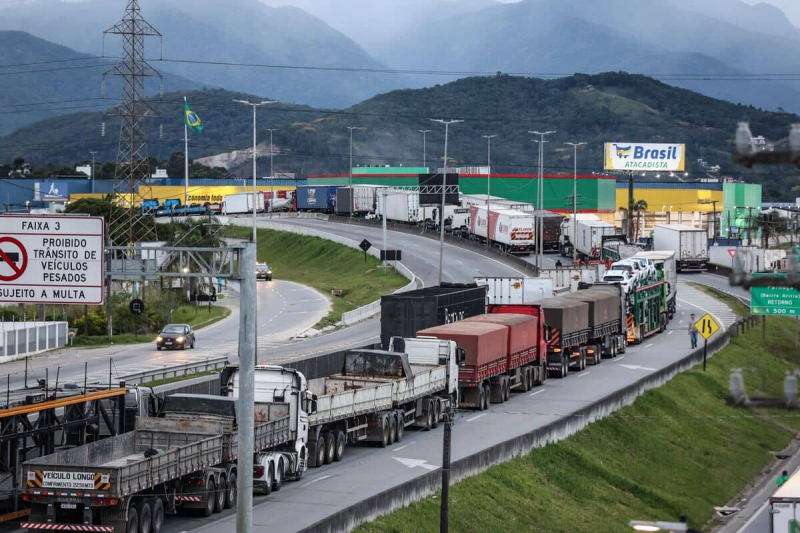 SAO PAULO | The roadblocks erected in Brazil by demonstrators refusing to accept the electoral defeat of far-right President Jair Bolsonaro had practically disappeared on Friday and only a few dozen diehards continued to protest in front of barracks.

The latest Federal Highway Police (PRF) count showed only 5 roadblocks in two of the country's 27 states, and none of them were preventing totally vehicular traffic.

“No federal highway is obstructed by a blockade,” the PRF said on its social media.

Since Jair Bolsonaro's defeat to left-wing icon Luiz Inacio Lula da Silva in the presidential election on Sunday, the PRF says it has removed 975 roadblocks on roads across Brazil, a country of continental dimensions.

< p>The Sao Paulo Ibovespa Stock Exchange index ended the session up 1.08%, after climbing more than 2% at the opening, reassured by this improvement in the political and social climate.

The movement began to run out of steam on Wednesday, after the broadcast of a video of the head of state calling on his supporters to “clear the roads”.

The National Confederation of Industry warned on Tuesday of the “imminent risk of shortage”, in particular of fuel, if the roads remained blocked.

Jair Bolsonaro nevertheless qualified as “legitimate” the demonstrations in front of barracks and other places of military command, which gathered tens of thousands of people on Wednesday in a dozen Brazilian cities.

These extreme demonstrators right demanded the intervention of the army to prevent Lula from returning to power for a third term, after leading the country from 2003 to 2010.

On Friday, a hundred die-hards were still posted in front of the army headquarters in Brasilia, and around 30 in Sao Paulo, AFP journalists noted.

In Rio de Janeiro, on the other hand, the demonstrators had left the square in front of the local military command.

After a campaign marred by several episodes of violence, a 12-year-old girl died Thursday, succumbing to her injuries after being shot when she was celebrating Lula's victory in the street on Sunday in Belo Horizonte (southeast).

President Bolsonaro has never explicitly acknowledged his defeat and even less congratulated Lula for his election, but he promised to “respect the Constitution”.

Geraldo Alckmin, elected vice-president, judged “very profitable” the first meeting Thursday that he had with members of the Bolsonaro government in order to prepare the transition until Lula's enthronement on January 1 in Brasilia.

On Friday, leaders of the Workers' Party (PT) visited the premises which will be occupied by the transition team, at the Cultural Center of the Bank of Brazil, in Brasilia.

The names of The ministers of the future Lula government were to be announced soon.