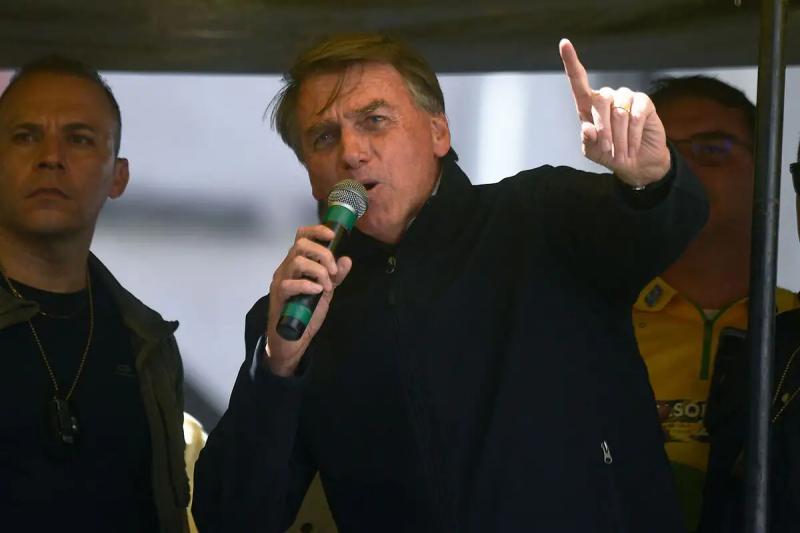 President Jair Bolsonaro launched the official October presidential campaign in Brazil on the first Tuesday by choosing, like the other favorite, ex-President Lula, a place that has deeply marked his political career: the one where he was close to death in 2018.

Jair Bolsonaro was at midday in Minas Gerais (southeast), in Juiz de Fora “the city where I was born again,” he said in the introduction to his speech.

< p>The former army captain, 67, pushed the symbolism down to the smallest detail by climbing onto a platform set up on the same intersection where he had been stabbed by an unbalanced man.

Dressed in a black jacket buttoned up to the neck concealing the shapes of a bulletproof vest, Jair Bolsonaro gave a speech loaded with patriotic declarations and allusions to God and the Bible.

He reiterated his promise to fight double-digit inflation, abortion, drugs and to defend “private property”, brandishing the “communist” threat in Brazil if he loses the elections in October against his rival Lula.

“Mito, mito, mito” (myth, editor's note), chanted the supporters of the far-right leader gathered around the slogan “God, fatherland, family and freedom”, several of whom were dressed in T-shirts in the colors of Brazil.

Jair Bolsonaro then invited “the most important person here” to speak: the First Lady, a fervent evangelical who received as much, if not more, an ovation than her husband. Michelle Bolsonaro invited the audience to close their eyes and recite “Our father”.

“It is about our future (…) the future of the family, of the homeland , most of the people who are here are faithful to God,” Marcio Bargiona, a 55-year-old former police officer, told AFP.

“The cleansing started four years ago, I want it to continue, I want the left to be eradicated from the country,” said Jaqueline Lopes, a 50-year-old teacher from Rio de Janeiro.

A favorite in the polls, Luiz Inacio Lula da Silva, 76, will also make an entry into the campaign filled with symbolism: an automobile factory in his stronghold of Sao Bernardo do Campo, near Sao Paulo (south- east), an industrial zone where he was a turner-miller, before becoming a trade union leader.

“Lula has always gone there during the key moments of his political career, to reinforce his image as a representative of the workers,” Adriano Laureno, political analyst at the consultancy firm Prospectiva, told AFP.

“As for Bolsonaro, he wants to present himself as a 'chosen of God' who survived the attack” of 2018, continues this specialist, for whom this election is “the most polarized since the redemocratization” after the dictatorship military (1964-1985).

The two favorites have already been crisscrossing the country for several weeks to get in touch with voters, but the official campaign, with meetings and distribution of leaflets, is only authorized from this Tuesday.

The spots televised will not be broadcast until August 26.

This Tuesday will also be marked in the early evening by the enthronement of Judge Alexandre de Moraes as President of the Superior Electoral Court (TSE).

This Supreme Court magistrate is one of President Bolsonaro's pet peeves, against whom he has ordered the opening of an investigation for disseminating false information about the electoral system.

The Head of State has constantly questioned the reliability of the electronic ballot boxes used in the country since 1996, citing “fraud” without ever providing evidence. Attacks that raise fears that he will not recognize the result of the ballot in the event of defeat.

Lula and Bolsonaro have both been invited to the investiture of Judge Moraes and could therefore end this first official day of campaigning together at the headquarters of the TSE, in Brasilia.

Monday evening, a poll by the institute Ipec gave a comfortable advantage to the former president on the left, with 44% of the voting intentions in the first round, against 32% for the current head of state.

The gap is narrowing, however . At the end of July, an opinion poll by the other benchmark institute, Datafolha, reported a wider gap: 47% for Lula, 29% for Bolsonaro.

The head of the State intends to catch up with the social benefits recently approved by Parliament during a controversial amendment to the Constitution which exceptionally authorizes new expenditure during the electoral period.

The main concern of Brazilians, according to the polls , is the economic situation, marked in recent years by high levels of unemployment and inflation, which have undermined Bolsonaro's popularity.