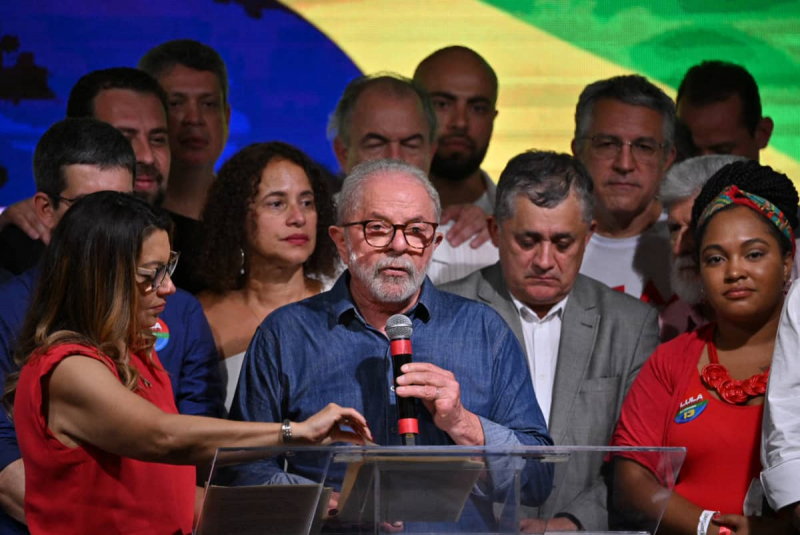 Between joy and relief, hundreds of thousands of Brazilians celebrated in the streets the election of left-wing icon Lula, who will return to the presidency after losing by a narrow margin far-right incumbent President Jair Bolsonaro.

This is the narrowest gap between two presidential finalists since the return to democracy after the military dictatorship (1964-1985).

The margin is much narrower than predicted by the polls, which had already heavily underestimated Jair Bolsonaro's score before the first round.

Lula's victory was greeted with fireworks and cheers in major Brazilian cities such as Rio de Janeiro and Sao Paulo, AFP journalists noted .

Arms raised, body hoisted through the sunroof of a black car, the new president-elect was cheered by the crowd gathered outside his residence in Sao Paulo, where he followed the count.

“These are tears of joy, I am so moved! Lula will save us from fascism,” reacted Mary Alves Silva, 53, in tears on Avenida Paulista in Sao Paulo.

“It's an indescribable feeling, Lula will change everything,” said Carolina Freio, a civil servant in a long red dress who was partying in a bar in Copacabana, Rio de Janeiro.

< p>Lula was quickly congratulated by several foreign leaders. US President Joe Biden hailed his “free and fair” election and his French counterpart Emmanuel Macron said his victory “opens a new page in the history of Brazil”.

Hope for a “healthy transition”

The 77-year-old former steelworker with an extraordinary destiny, who experienced hunger in his native Pernambuco (north-east) as a child, will officially return to the top of the state on January 1.

“It's the most important day of my life,” he said in the morning when voting.

Lula had achieved record popularity after his first two terms (2003-2010), but had then experienced disgrace, going through prison, after convictions for corruption finally quashed for formal defects.

< p>After this narrow victory, Lula will have to deal with a Parliament that is clearly leaning to the right and will have to forge broad alliances to govern.

“This narrow result shows that Bolsonaro's campaign was more effective in convincing new voters, but it was not enough,” Leandro Consentino, a political scientist at the Insper private faculty, told AFP.

Jair Bolsonaro is the first president running for a second term not to be re-elected since the return to democracy in 1985 and remained silent an hour after the announcement of his defeat.

His reaction was very expected: after launching relentless attacks on the “fraudulent” system of electronic ballot boxes, he said on Friday: “Whoever has the most votes wins. It's democracy” — without convincing.

When he voted in the morning, Lula hoped that the Bolsonaro government would be “civilized” and “understand (it) that a healthy transition is necessary .

“I hope that if I win the election, he will have a moment of wisdom and call me to acknowledge the result,” Lula said last Monday.

Many fear a Brazilian response to the onslaught of the Capitol after the defeat of Donald Trump, which could target, for example, the Supreme Court so often vilified by Bolsonaro.

“Bolsonaro will question the result”, estimated on the eve of the election Rogerio Dultra dos Santos, of the Federal University of Fluminense.

The ex-captain can count on “the support of its most radicalized voters (…) and cause unrest”, according to the analyst, who however does not see the armed forces venturing into a coup de force and underlines that the democratic institutions are solid.

The campaign between the two men who are opposites took place in a brutal and ultra-polarized climate that saw them insulting each other copiously while social networks carried torrents of disinformation.

No violent incidents did not taint the vote of some 156 million Brazilians called to the polls on Sunday.

But this second round was marked by a lively controversy around the filtering barriers of the Federal Road Police (PRF) which held back voters, especially from the poor regions of the Northeast, electoral stronghold of Lula.

Congratulations, dear @LulaOficial, for your election which opens a new page in the history of Brazil. Together, we will join forces to overcome the many common challenges and renew the bond of friendship between our two countries.

Twelve Brazilian state governors were also elected on Sunday, including Bolsonarian Tarcisio de Freitas in the state of Sao Paulo, the most populous and richest in Brazil.