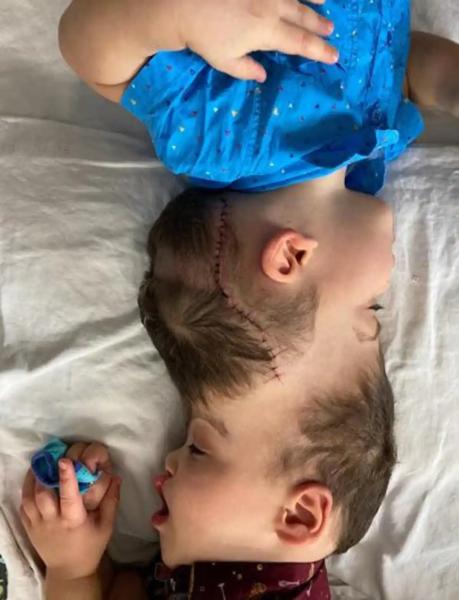 Two Brazilian Siamese twins born bound by the skull have been successfully separated following multiple operations, the “most complex” intervention ever performed for this kind of case, the team assured on Monday medical, which used virtual reality to prepare it.

After spending most of their lives in a hospital in Rio de Janeiro (southeast Brazil) in a special bed, Arthur and Bernardo Lima, three and a half years old, can now look each other in the face after several marathon operations in early June.

Adriely Lima, their mother, wept with relief at the end of the separation: “We had been living at the apartment for four years. hospital,” she said in a statement.

This separation was made possible with the help of the London-based charity Gemini Untwined, who described it as “the most complex” ever, given that the brothers shared several vital blood vessels.

“It was without a doubt the most complex operation of my career,” added neurosurgeon Gabriel Mufarrej to AFP, from the Paulo Niemeyer Brain Institute (IECPN), the hospital where the 'operation has taken place.

“At first, no one thought they were going to survive. It is already historic that the two could be saved,” he insisted, adding that the twins were still in the hospital where “a long convalescence” awaits them. “It is not yet known how much they will be able to live a normal life”, he however tempered.

In total, the twins underwent nine surgeries, including one of 1 p.m. on the 7 June and another at 11 p.m. the day after.

To prepare them, the hundred or so members of the medical team used a state-of-the-art system of virtual reality, in order to reconstruct the anatomy of the Siamese before operating on them.

“It looks like something from the space age”, described the British neurosurgeon Noor ul Owase Jeelani, of Gemini Untwined.< /p>

“It's wonderful to be able to observe the anatomy and practice the operation beforehand without putting the children's lives in danger (…) You can't imagine how reassuring it is for surgeons,” he told the PA news agency.