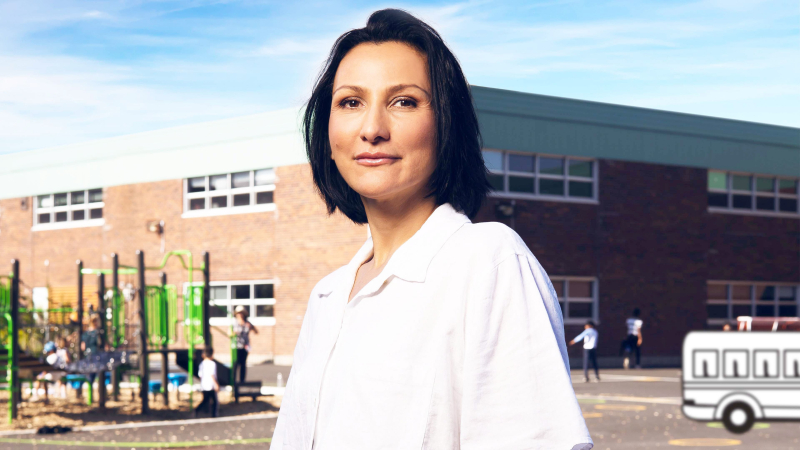 It's a privilege to enter people's homes to inform them through television, and that's why Miriam Laquerre Tantawy likes to take part in thought-provoking projects. As a director, she has the chance to tackle subjects such as education, agriculture, the fight against poverty, thanks to programs such as Farmers, The future is ours and The schoolyard is full .

In this documentary series, she follows Jannie-Karina Gagné, wife of Jean-Nicolas Verreault and mother of three girls with special needs, in her quest to understand how school could be better adapted to allow these young people with different s thrive in an environment that suits them. A series that paints a clear portrait, that provides solutions and that above all wants to bring about the long-awaited changes.

When you embark on a quest with a protagonist like Jannie-Karina Gagné for whom it's is very personal, should we make it our own mission?

It is certain that when you say yes to a project like this, it lights a flame. I am naturally sensitive to everything related to social justice and education is one of them. This project was led by a great team, whether in research, content production or coordination. We were all moved by the importance of raising such important questions. I don't have children, but I was a summer camp leader and I saw the impact we can have on young people. I did my primary in an alternative school. It was an experience that made me see the school system differently.

You enter the homes of people whose daily lives you document. What does it take to gain their trust and keep them natural?

The first work is done with Émilie Dupras who is an experienced researcher. It creates the links. Most of the people we have met have a story similar to Jannie's. They know they will be understood since his reality resembles theirs. And we are a very small team. We enter people's homes with great delicacy, we take the time to introduce ourselves, to put them at ease so that they are ready to open up. Our interviews last approximately two hours. We really take the time to hear their full story. We are not rushing anything. Depending on the angle, the interviews are split into two or three episodes.

For The yard is full , we followed the journey of Jannie and her family. This time around, she carries a quest, which requires her to conduct interviews. What tone did you choose to establish from the start?

It was quite new for her, but what interested us was not having a Jannie host, but to attend meetings between parents, between mothers. She's the mom who asks questions and seeks answers.

It is a miniseries that asks questions, but also offers solutions. You went to Finland where more personalized support is offered to children with special needs. Why was this process important?

Jannie had learned a lot about what is done there. It gave him hope. This is an example that proves that we can do better in Quebec when we collectively decide that we want to do better. But we would almost have to wipe the slate clean. As Jannie says, if she lived there, her children would be supported.

You met the Minister of Education at the time, Jean-François Roberge. Do you think you had an impact?

We were weeks away from the election, so he couldn't promise us much. But we had no difficulty getting access to him. We had a 45 minute interview. He didn't have the language of wood, he was listening and I think that Jannie touched him for real with his story. Making the problem heard was a first step. Shortly after our last day of filming, the Québec Ombudsman's Special Report was unveiled and revealed exactly what is being talked about in the series. In January, the ministry will have to render accounts. We will definitely follow that. Maybe we could do an epilogue, why not!