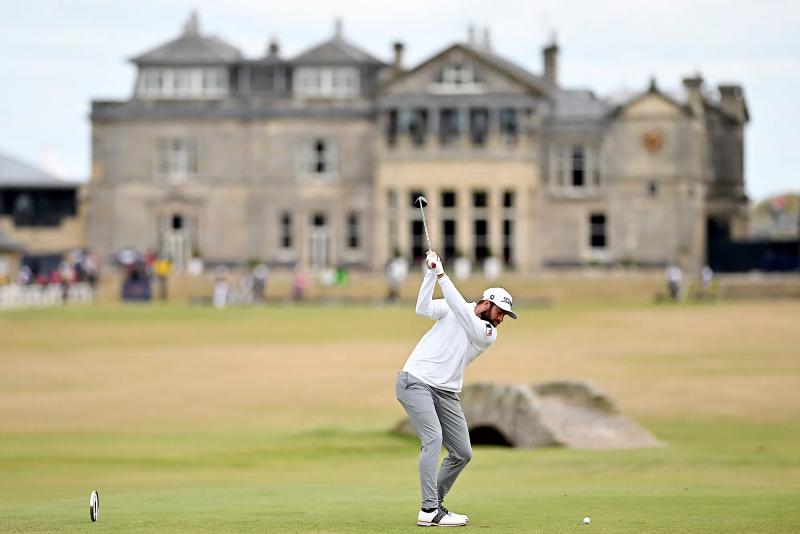 ST ANDREWS, Scotland | During a trip to Scotland in 2010, Cameron Young went through the links of St Andrews. From the height of 13 years and from the back tees, the teenager had recorded a resounding 68. Twelve years later, he sits at the top of the British Open at the end of the first round where he shot 64 (- 8).

“I never thought I would end up here one day. At that time, I did not yet understand that I could play golf in college and in the pros. I was just trying to get the best score,” said the 25-year-old New Yorker.

“I knew I was better than many golfers, but I had no idea what serious options might be available to me later. »

Without rushing his pace, his father David was then a head professional in a club in New York State. Son played golf, baseball and hockey like many teenagers in the northeastern United States.

When Cameron realized he could move on, he got to work pushing its limits on the course. He stood out in major American junior tournaments, even making his place in the Junior Ryder Cup roster.

In 2015, he joined the Deamon Deacons at Wake Forest University where he also did sparks. He thus paved his way to his first appearance in a major tournament at the United States Open at Pebble Beach in 2019.

In a bit of chat during practice with Canadian Corey Conners earlier this week, his mother Barbara showed us how proud she was to see him back on the Scottish links. A place where she cherishes memories of the past.

And on a humorous note as she scanned the horizon near the 15th hole. “I'm glad he chose golf because I didn't want to sit in freezing arenas all day. He made the right choice. Golf courses are much better. »

Ms. Young was quick to recount the son's prowess on that unforgettable 2010 trip. The family played both the Old and New Courses in addition to the legendary Scottish courses of Carnoustie, Kingsbarn, Gullane and Crail. And not always in the easiest conditions.

Climbing the first mound of the Old Course, Cameron rushed ahead members of the R&A chatting on the forecourt of the magnificent pavilion. His father David asked that he be able to set off there.

Innocence helped him. “Luckily, I did not yet know the meaning of this organization. Otherwise, it is certain that the nervousness would have annoyed me. Performing on this mound is my great memory of this place,” he insisted.

With humility, at a press conference, after his dazzling initial card, Young n did not reveal his 2010 score. But his mother had done so four days earlier!

Although this experience was unique to him and even if the Old Course has not changed much for a decade, the playing conditions are not the same during the Open. Obviously.

The player playing his first full season on the PGA Tour studied the course carefully during his four days of training this week. “When I visited in 2010, I had not really understood all the possibilities of style of play. I had not taken the time to study the course. You can play it every day for a full year without even scratching the surface of the knowledge you can find there. There are so many little details to know, nuances and subtleties to discover.

“You have to know how to accept your preparation which cannot exceed 5% of everything you need to know around here. It is impossible to know everything as the flood of information is immense. »

One thing is certain, however, he loves to set off on the Old Course since he cannot find this unique experience in the United States.

MAPLE IN THE SPOTLIGHT

Several Canadians have crossed the Atlantic to attend the Open. While waiting at the airport in Montreal, I met two Montrealers, members of the Whitlock Golf Club. I even saw a CH cap on the street. But today, Malcolm stood out by proudly wearing the maple leaf. Met near the wall of the Road Hole, the 17th, this Halifax resident won a ticket to the Omnium lottery for Monday's practice round. But luck smiled on him when he was able to buy the Links package giving him access to the event every day. At a cost of $700, it allows him to sit in the stands and even includes food. By getting noticed, he lives an unforgettable week in St Andrews.

Whatever he says in his very rambling and contradictory remarks, Ian Poulter was booed when he showed up on the first tee of the Old Course this morning. The terrible English child, member of the LIV Golf series, was cooked by the British press on the subject. Despite the reality and the recordings, he denied everything. On his first shot, he hit a big left hook. The ball crossed the 18th fairway and ended five yards from the out-of-bounds stakes. he Old Course hotel has been booked wall to wall for years. Golfers like Tiger Woods and Henrik Stenson stay there. Near the 17th hole, the 5-star establishment makes your mouth water. It is the old station of St Andrews. The American company Kohler, very active in the world of golf, put its paw on one of the most beautiful complexes in Europe in 2004. Next Monday, the rooms will be available for the sum of $800. This week, it is better not to think about the tariff.