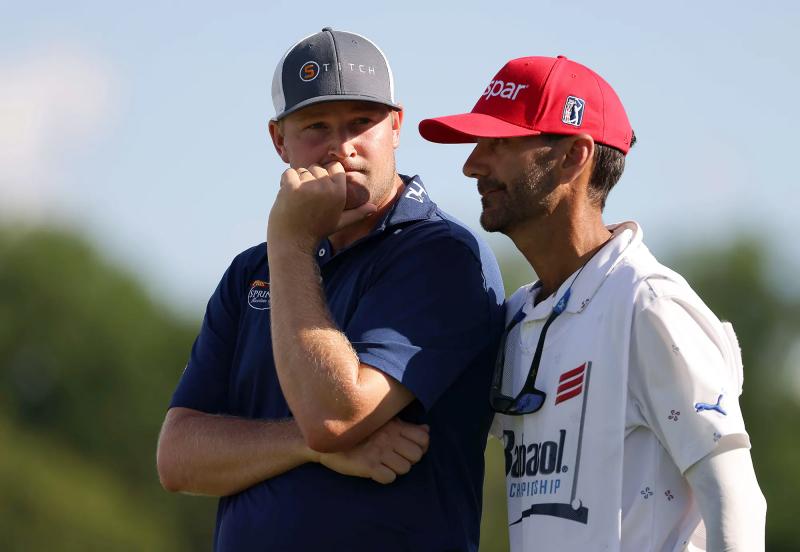 ST ANDREWS, Scotland | Each pilgrimage to the birthplace of golf is unique. That of cadet Julien Trudeau is all the more so this week. His golfer, Trey Mullinax, secured the last available ticket for the British Open at St Andrews last weekend.

On a course he knew well in Kentucky, Mullinax drained a major 10-foot putt on the 72nd hole of the Barbasol Championship. By beating Kevin Streelman with a stroke, he won his first PGA Tour title and also received an invitation to the Old Course.

“Trey knew the stakes. He knew that the Barbasol was the last stage of qualification for the Open. We talked about it before the tournament. He said to me: “If we win this week, how about two or three weeks off when we get back from Scotland?” »

“I immediately accepted the agreement, joked Trudeau, met on Saturday near the R&A castle. But we had to stay focused on the job to be done in Kentucky by keeping a cool head in the final round. There was a tournament to win, because our first objective is a good result.

“And above all, with a victory, Trey could secure his PGA card with full status this year. next. That was the most important thing before participating in the Open,” said the man who saw his boss go from 140th to 71st in the FedEx Cup rankings.

And presto, in St. Andrews

Victorious, Mullinax and Trudeau therefore jumped on the plane on Monday and arrived in Scotland on Tuesday morning. They immediately got to work despite problems with equipment being damaged during the trip.

The golfer is taking part in the Open for the first time and experiences this baptism of fire on a course so rich in history only in details to be respected. He is doing very well there while he is in the top 20.

Luckily, Mullinax can count on Trudeau, who has been there twice before. In 2013, he carried the bag of Canadian Graham DeLaet during the Dunhill Links Championship.

L experiance is precious, but the work needs to be fine-tuned at each passage. Impossible to note everything and identify all the particularities of the place. The Old Course has lined the North Sea since the 15th century. The learning is almost endless.

Among the issues of the week, Trudeau continues to shape his new relationship with his boss. As each golfer is different, he discovers it every day. He's only been with her for a few weeks. Together, they are in their fifth tournament.

They have already gone through a tough time when they made a very costly mistake at the John Deere Classic two weeks ago. Despite his 12 years of experience, the youngest learned a lesson that he will retain throughout his career.

Trudeau had let his player opt for a too daring move in a thorny situation. This one committed a double bogey and got out of the tournament. A careless mistake that opened the mind of the cadet.

“I wanted to see his analytical process in decision-making, but I should have guided him and advised him on the options to play. Trey is capable of executing great and solid shots. So I changed the way I approach certain elements of our working relationship. I act differently with him than I did, for example, with Adam Hadwin or Graham. »

Before accepting the job with Mullinax, the man, who is approaching his forties, had been approached by Daniel Berger's team. He had jumped at the chance to carry the bag of the 21st player in the world in mid-May. But a poor performance by the American at the PGA Championship of America in Southern Hills immediately cost him his job.

It was then that the 30-year-old golfer, of Alabama, threw him a pole. This new job makes him discover new horizons. He gets to know the tender but determined athlete, the family man and the Christian.

According to him, the victory in Kentucky and this good performance at the Omnium will help solidify their relationship in addition to build trust in each other. This is just the beginning of their adventure.

Feet in the North Sea

Ten days after leaving the very warm and turquoise waters of the Caribbean Sea, I absolutely wanted to dip my toe in the North Sea, very close to the Old Course. On a superb sunny day on Saturday and 21 degrees Celsius, it was the perfect low tide time. Thus, I crossed the 200 meters from the shore to join vacationers and the water. The knee deep dip was worth it in the first 10m but after that the water temp was pretty chilly. It varies around 15 degrees Celsius (60 degrees Fahrenheit). But turning my back to sea, I was treated to a magnificent view of St Andrews.

Less than an hour later, the tide had done its work and the water had reached the shore. St Andrews experiences two impressive high tides and two low tides each day.

It was one to midnight when my colleague from the Toronto Sun, Jon McCarthy, and I checked out a small market this week. In Scotland, businesses cannot sell alcohol after 10 p.m. The cashier managed to leave us a few cans of taped English hops at 9:59 p.m. It was perfect for rewatching the highlights of the Open day and Jon got to watch his classics of Who Wants to be a Millionaire at the end of the evening!

Enjoying a delicious and traditional fish and chips on the Old Course , you have to watch out for the dozens of gulls that are watching. In fact, by the sea, gulls number in the thousands on the site. However, wildlife guardians release birds of prey to chase away invaders. We make the jump when it passes nearby with an Indian Eagle-Owl, a Harris Hawk or a Tawny Eagle. But seabirds are more distant.