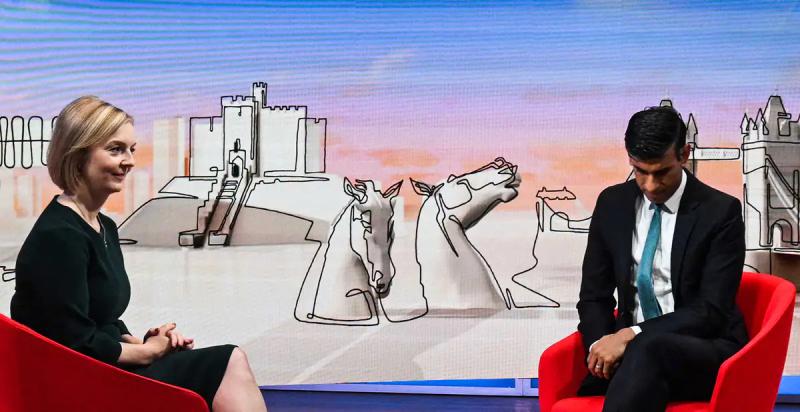 It's the end of a long race for power: two months after the resignation of Prime Minister Boris Johnson and in the midst of a cost of living crisis, the British will finally find out on Monday who will succeed him , probably Liz Truss.

The outcome of the vote, open to some 200,000 members of the Conservative Party, leaves little room for suspense as the head of diplomacy Liz Truss is ahead in the polls against former finance minister Rishi Sunak.

The 47-year-old minister, who remained loyal to Boris Johnson to the end when the resignations within the executive were counted by the dozens in early July, will become, barring a dramatic change, the fourth British Prime Minister since the Brexit referendum in 2016, the third woman to hold this post after Margaret Thatcher and Theresa May in the history of the United Kingdom.

Following the close of membership voting on Friday evening, the announcement of Boris Johnson's successor, pressured to resign after a series of scandals and lies, is scheduled for 12.30pm (11.30am GMT).

< p>The new Downing Street tenant takes office in an explosive economic and social context, with inflation that exceeds 10% and is expected to rise considerably, and an exorbitant rise in energy bills that threatens families and schools, hospitals and businesses.

Economic policy naturally found itself at the center of this long campaign, marked very to the right, but at times seemed disconnected from the dramatic worsening of the crisis during the summer.

Liz Truss seduced by promising massive tax cuts and taking a very tough tone against unions. For his part, Rishi Sunak, a wealthy former banker, lost points by advocating an economic realism far from “fairy tales” and was seen as a lecturer technocrat unable to understand the difficulties of British households.

On Sunday, Ms. Truss assured the BBC that elected, she would act “from the first week” to help the British with their energy bills, refusing however to specify the concrete nature of the measures she intended to take.

She also stressed that she would present “within a month” a tax reform project to deal with the crisis.

If she has won over the base of the ruling party for 12 years in the United Kingdom, 52% of Britons believe that she will be a poor or even terrible Prime Minister according to a recent YouGov poll. It is therefore not certain that these vague promises are enough to calm the social discontent that has shaken the country like never since the Thatcher years (1979-1990).

The country has experienced what has been described as a “summer of discontent”, with multiple strikes in transport, postal services, hospitals, criminal lawyers and other sectors.

And this in a period of virtual power vacuum, with a resigning prime minister who was conspicuous by his absence, refusing to take measures to relieve the British, missing meetings important and leaving twice on trips abroad with his family.

But while both Tory candidates have been hard at work pushing for 'change' after the scandal-ridden Johnson era, the former prime minister is already missing some of the Tory Party's membership — who are more male, older and white than average. of the British.

Boris Johnson refused to publicly support either of the contenders and said in a farewell message in the Sunday Express on Sunday that it was time to “support the new leader with all our hearts,” believing that they were both “more than capable” of filling the post.

He did not rule out a return to politics, however.

He will go on Tuesday to submit his resignation to Elizabeth II at her summer residence in Balmoral, Scotland, a first for the 96-year-old sovereign who has difficulty moving around and will not make the trip to London.

His successor will follow to become the 15th head of government of the monarch's 70-year reign, before returning to London for to deliver his maiden speech outside 10 Downing Street, form his government and face opposition Labor leader Keir Starmer for the first time in Parliament on Wednesday.