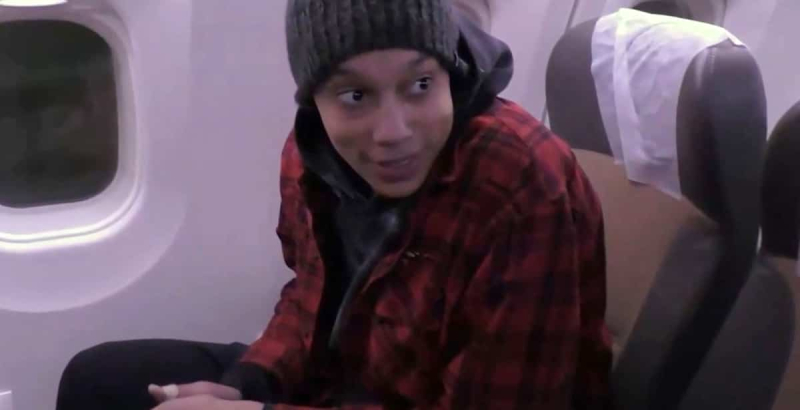 American basketball star Brittney Griner arrived in the United States on Friday morning after being released from a Russian prison in exchange for an arms dealer dubbed the “dealer of death.”

< p>She landed in Texas around 10:40 a.m. GMT, according to footage from CNN and Fox News.

Brittney Griner, 32, who was arrested in Russia in February on drug trafficking charges, and Viktor Bout, 55, who was serving a 25-year sentence in a US prison, were exchanged at an airport in Abu Dhabi, United Arab Emirates.

In a video of the Russian security services released by the TASS agency, a tall figure in a red jacket walks on a tarmac, a small smiling man with a gray mustache goes to meet him. Men in suits who accompany them greet each other on both sides then go back in the opposite direction.

In the images of the exchange, which seems straight out of the Cold War, the sportswoman appears with her hair shaved, without his usual long dreadlocks.

“A few moments ago I spoke with Brittney Griner. She is safe. She is on a plane. She is on her way to the United States,” US President Joe Biden said earlier during a brief speech at the White House.

The basketball player has “good morale” despite “the trauma” endured, added the American president.

In a statement, Brittney Griner's family said, “We would like to express our sincere gratitude to President Biden and his administration for their tireless work in bringing Brittney home.”

In another video broadcast by the pro-Kremlin channel RT, we see Brittney Griner leaving her penal colony bags in hand. A guard asks her in Russian, “Do you ever come back here?” 'she didn't know where she was being led.

In the United States, the basketball player's wife, Cherelle Griner, said she was “overwhelmed with emotions”.

“Not a day in the last 10 months that we haven't worn Brittney Griner in our hearts and thoughts,” said WNBA Women's Professional Basketball League Commissioner Cathy Engelbert, who also hinted that the basketball player would land in Texas.

Saudi Arabia also participated in the exchange procedure, according to a joint statement with the United Arab Emirates, specifying that “the mediation was carried out” by the President of the Emirates Mohammed bin Zayed and by the Saudi Crown Prince Mohammed bin Salman. .

Joe Biden thanked Abu Dhabi but the White House nevertheless qualified its role as well as that of Saudi Arabia.

“The only countries that participated in the negotiations are the United States and Russia,” said US executive spokeswoman Karine Jean-Pierre.

A senior US official said the discussion with Moscow remained focused on the release of Brittney Griner, and the US has made this known to Ukraine and other allies.

The Kremlin stressed for its part on Friday that the negotiations “concerned only the exchange” and did not put an end to the “crisis” between the two countries, whose relations are “still in a deplorable state”.

Another American detained in Russia, former serviceman Paul Whelan, was not included in the exchange. “Even if we failed to obtain the release of Paul, we will never give up,” assured Joe Biden.

In a call with CNN from his penal colony in Russia, Paul Whelan is said to be “strongly disappointed”. 'I don't understand why I'm still here,' he said.

In a statement, his family said they were 'happy' for Ms Griner but 'still devastated' to know Paul Whelan in a Russian prison.

Arrested in December 2018 in Russia, he was sentenced to sixteen years in prison for “espionage”, a conviction which he denounced as fabricated.

Brittney Griner, 32-year-old African-American sportswoman years old and double Olympic champion, was arrested in February in a Moscow airport with a vaporizer and liquid containing cannabis, a product banned in Russia.

She had been hired by the Russian team of Ekaterinburg, during the American offseason, a common practice.

In August, she was sentenced to nine years in prison and, after her appeal was rejected, was transferred in November to a penal colony in central Russia.

Her supporters have always denounced a hostage-taking to haggle with Washington in the midst of the conflict in Ukraine.

The name of Viktor Bout had been mentioned in the summer. Famous Russian arms trafficker, arrested in Thailand in 2008, he was sentenced to 25 years in prison in the United States.

Viktor Bout landed in Russia on Thursday, according to a television channel Russian public. “Don't worry, everything is fine, I love you very much,” he told his mother, Raïssa Bout, when he arrived in his country.

Nicknamed the “merchant of death “, his extraordinary career served as inspiration for the film “Lord of War” with Nicolas Cage.