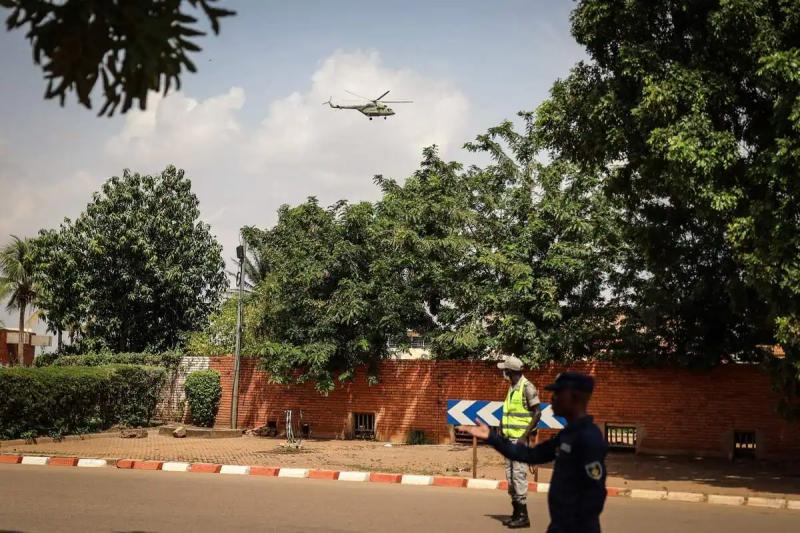 Burkina Faso experienced a second coup in eight months on Friday, when Lieutenant-Colonel Paul-Henri Sandaogo Damiba, who came to power in a putsch at the end of January, was in turn dismissed from his position. functions by soldiers.

Adding the two putsches in Mali and the one in Guinea, this is the fifth coup in West Africa since 2020.

After a day peppered with shooting in the district of the presidency in Ouagadougou, about fifteen soldiers in fatigues and for some hooded spoke, shortly before 8:00 p.m. (GMT and local) on the plateau of the national radio and television .

“Lt. Col. Damiba is removed from his position as president of the Patriotic Movement for Safeguarding and Restoration” (MPSR, the junta's governing body), the military said in a statement read by a captain.

< p>The new strong man of the country, appointed president of the MPSR, is now Captain Ibrahim Traoré, he said.

Mr. Traoré, 34, was until now the head of the anti-jihadist special forces unit “Cobra” in the Kaya region (north).

The fate of Mr. Damiba remained unknown on Friday evening.

The putschists also announced the closure of the country's land and air borders from midnight, as well as the suspension of the Constitution and the dissolution of the government and the Transitional Legislative Assembly.

The soldiers invoke “the continuous deterioration of the security situation” in the country.

“We have decided to take our responsibilities, driven by a single ideal, the restoration of the security and integrity of our territory”, they continued.

“Our initial common ideal has been betrayed by our leader in whom we had placed all our trust. Far from liberating the occupied territories, the once peaceful areas have come under terrorist control,” they said.

When he came to power on January 24, also in a statement read by armed men on television, Mr. Damiba had promised to make security his priority, in this country undermined for years by bloody jihadist attacks. But these have multiplied in recent months, particularly in the North.

The putschists have promised to convene “immediately the living forces of the Nation” in order to appoint a “new President of Faso, civilian or military”.

In a press release, the Economic Community of West African States (ECOWAS) – whose authorities Burkina has been suspended since the January coup – “condemned in the strongest terms the seizure of power by the force that has just taken place”.

ECOWAS finds “this new coup de force inopportune at a time when progress has been made (…) for a return to constitutional order in no later than July 1, 2024”.

Friday was a very tense day in the Burkinabè capital, shots having been heard before dawn in the district housing the presidency and the headquarters of the junta, according to several witnesses, then again in the early afternoon.

Several axes of the city were blocked all day by soldiers posted on the main crossroads of the city, in particular in front of the headquarters of the national television.

During the day, government spokesman Lionel Bilgo had spoken of “a military crisis” on “premium claims”.

In the afternoon, several hundred people, some of whom were waving Russian flags, gathered in the large Place de la Nation in Ouagadougou to demand military cooperation with Russia, reject the French military presence in the Sahel and demand the departure of Lieutenant-Colonel Damiba, noted an AFP journalist.

Moscow's influence has grown steadily in several French-speaking African countries in recent years and it is not uncommon to see Russian flags in such demonstrations.

The coup carried out in January by Lieutenant-Colonel Damiba had overthrown President-elect Roch Marc Christian Kaboré, already unpopular in the face of rising jihadist attacks.

But in recent months, deadly attacks, affecting dozens of civilians and soldiers, have multiplied in the north and east, where cities are now subject to a blockade by jihadists, who blow up bridges with dynamite and attack supply convoys circulating in the area.

Two of these convoys were attacked in September, each time with a heavy toll.

Thirty-five civilians, including many children, died in the explosion of an improvised device on September 5. And on Monday, eleven soldiers were killed and 50 civilians missing in the attack on their convoy.

On September 13, Lieutenant-Colonel Damiba dismissed his Minister of Defense to assume this responsibility himself. role.

Other attacks have particularly marked public opinion, such as the massacre of Seytenga (north) in June, during which 86 civilians were killed.

Since 2015 , recurrent attacks by armed movements affiliated with the jihadists of Al-Qaeda and the Islamic State group, mainly in the north and east of the country, have left thousands dead and caused the displacement of some two million people.&nbsp ;