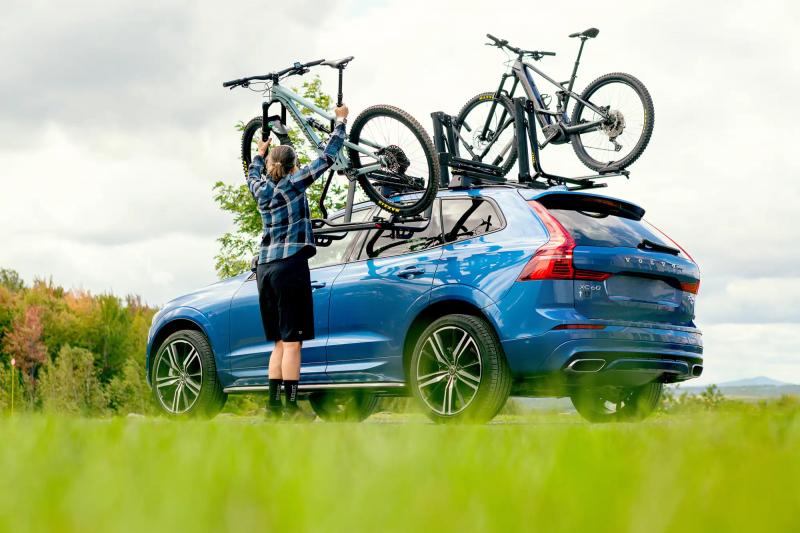 Take the road of the holidays by bicycle sometimes requires transporting it by car to the destination you want to visit on two wheels. Equipping your vehicle with a bike rack is a practical solution.

Before choosing a bike rack for the car, you need to draw up a picture of the situation. This will take into account, among other things, the number and type of bicycles to be transported (child, mountain, road, electric, oversized tires, etc.), the fixings to be favored according to its mount (on the wheels, the frame, the fork, etc.), the amount you wish to invest, then the vehicle on which the support will be installed.

On a hitch, trailer

If the vehicle has a trailer hitch, it can accommodate a support that will hold the bikes in place on one or more platforms or on horizontal bars. According to Alexandre Laporte, co-owner of Écho Sports, these models can support more weight (like several electric bikes) while being more stable.

The foldable Easyfold XT model from Thule and its loading ramp.

Manufacturers who are constantly looking to make life easier for athletes are constantly developing their products, in particular by allowing access to the trunk of the car even when the support is fixed, then by favoring easy and space-saving storage.

> Yakima's EXO system allows you to vary the fixings and anchorages to transport other equipment.

Thule's foldable Easyfold XT includes a boarding ramp for rolling your bike onto the platform. Yakima's Exo system, for its part, offers the possibility of changing the bindings to carry other equipment. As for the Panache racks designed and manufactured in Sherbrooke, they propose to securely suspend the bicycles vertically by the stem and the handlebars in order to facilitate loading.

On the Panache bicycle rack, the bicycles are suspended vertically using the handlebars and stem.

When the vehicle does not have a trailer hitch, the bicycles can be perched on the roof using a support fixed to bars or with powerful suction cups. The bike(s) will then be held in place by the wheels or by the fork (by removing the front wheel).

Few people are familiar with suction cup mounts, such as those from the SeaSucker company. This is the same principle of suction cups used when installing windows, explains Frédéric Duchesne, co-owner of Demers bicycles and cross-country skis. “Once stuck, they're impossible to remove,” he says, except using the tool provided. Designed for the roof or the rear of the vehicle, this support does not damage the car and is more suitable for light bikes.

For those who find it difficult to lift their mount to such a height, there is a solution. The MOS UpLift, thought and designed in Quebec, is installed on the crossbars of a vehicle, then is equipped with a lifting system that facilitates the loading and unloading of bicycles, since this transport accessory can easily be moved. towards you.

The Thule GateMate Pro protects the tailgate and allows you to attach bikes to it.

Various accessories keep bikes in place in pick-up trucks, including Thule's GateMate PRO, which offers the ability to secure multiple bikes to the vehicle's tailgate, while protecting the vehicle . The front wheel remains outside while the rear wheel rests inside the truck bed.

For smaller budgets and less frequent transport needs, there are also on the market brackets that attach to the trunk of a car using hooks and straps.