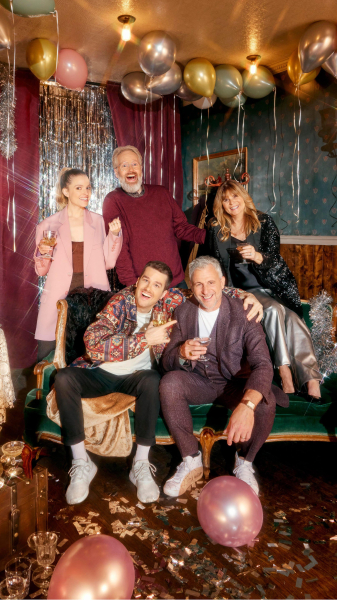 The main actors are known. Guylaine Tremblay, François Bellefeuille, Sarah-Jeanne Labrosse, Patrick Huard and Pierre-Yves Roy-Desmarais will take up the challenge of Bye bye 2022, but who will be their Turkic heads? Ahead of the traditional humorous review piloted for a seventh year by Simon-Olivier Fecteau, let's speculate!

It's a classic. Political news invariably feeds the Bye bye. The re-election of the CAQ should bring us back François Legault, but we can also think that Pierre Poilievre, the new leader of the Conservative Party of Canada, will make an appearance.

Speaking of Poilievre, his support for truckers who parked for weeks last winter in downtown Ottawa reminds us that this disturbing convoy has something to inspire the authors of the < em>Bye bye.

Influencers who party on a plane in defiance of the health rules then in force, a prime minister who calls them Ostrogoths, and an organizer, James William Awad, who is holding a surreal press conference. This is a sketch that writes itself.

It seems unthinkable to miss the war in Ukraine. Here, the challenge will be to find the right tone to evoke this tragedy. Highlighting the courage of the Ukrainian president is an avenue that could be explored.

Speaking of discomfort in a gala, no one forgot Will Smith's slap to host Chris Rock in the middle of the Oscars, right?

The new head coach of the Montreal Canadiens has won everyone over with his thoughts on how to lead a team, to the point of forgetting the losing streak. The authors of Bye bye surely took note.

The #metoo movement continued to spill ink in 2022 and it is Julien Lacroix who emerges as the most serious candidate to pass in the twister of Bye bye.

For months, Maripier Morin has been multiplying intimate confessions about her drug addiction problems, her motherhood, her twisted relationship with Brandon Prust, etc. In interviews in magazines, in his podcast or that of others. It's a lot. It's almost a parody.

In the crosshairs last year because of his refusal to be vaccinated and to sound animation of Masked Singers, Guillaume Lemay-Thivierge earned a second impersonation of December 31 when he caused unease by clumsily interrupting the Gémeaux Awards Gala to settle scores.

Let's stay in the artistic field and galas in order to promote the candidacy of Ginette Reno who renames the rapper FouKi, who has become Funky, during the Gala de l'ADISQ.

The royal family provided quality raw material for the end-of-year broadcasts. The Queen who dies, Charles's accession to the throne and the Harry and Meghan saga, it's abundance for the creators of Bye Bye.

In a similar vein, Justin Trudeau and Gregory Charles created one of the funniest moments of the year with their unlikely duo at a London hotel during the Queen's funeral .

Still on the same theme, the crusade of the leader of the Parti Québécois and his deputies to abolish the king's oath is also noteworthy.

It happened late in the year, but a nurse suspended for eating a toast could give a skit on our health care system with some bite.&nbsp ;

The head of the Catholic Church rarely visits Quebec. In the context of reconciliation with the First Nations and at a time when sex scandals continue to taint the institution, an imitation of Pope Francis is conceivable.

– With the collaboration of Sarah-Émilie Nault