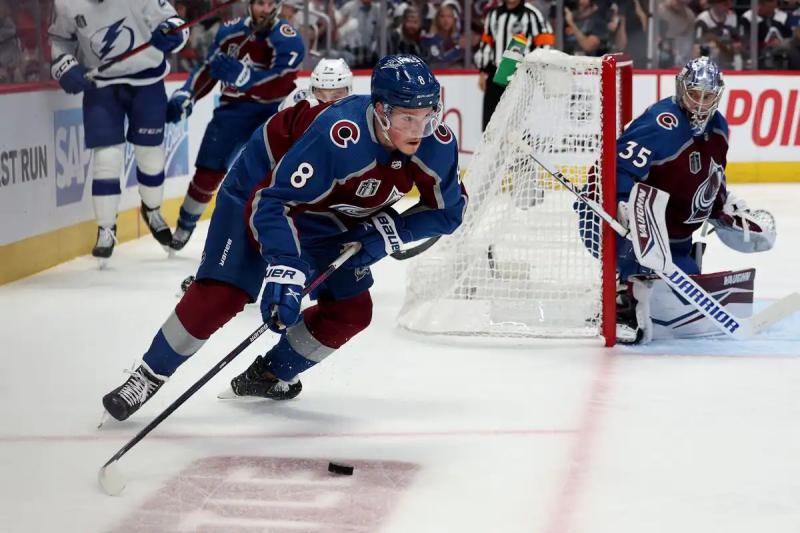 Cale Makar doesn't have much hair on his chin and he still has the red cheekbones of a young man. Behind this angelic face hides a prodigious defender of only 23 years old.

Norris Trophy candidate for the second straight season and very serious contender for the Conn-Smythe if the Colorado Avalanche win against the Tampa Bay Lightning in final, Makar conquered the NHL at breakneck speed.

The Albertan has destroyed the adage that a defenseman needs a lot more time to develop.

“Cale is the best defenseman in the world,” said center Nathan without hesitation. MacKinnon. I've been saying this for a few years now. He's so dynamic as a skater, he jumps into the game, he's smart.”

“Cale is the best player in the world,” defender Devon Toews said. So in my eyes, it is impossible to find a better partner than him. He is the top defenseman in the NHL. He complements me well and I do my best to complement him!”

“I have to give him the puck as often as possible,” continued Toews. I would be crazy not to, he is such a special defender. There is no better skater than him as a defender. He can create space for himself or his teammates.”

“He doesn't get distracted by noises outside,” added general manager Joe Sakic. He is a terrific defender. He concentrates on his job. I don't think you can find a humbler guy than Cale.”

< p>And Makar doesn't just have offensive missions with the Avalanche. He finds himself on the ice for nearly 27 minutes per game, and he has the mandate to slow down the big lines of the opposing team in the company of Toews.

At the media day of Last Wednesday at the Ball Arena, Makar offered a plea for his accomplice with the Avalanche, number 7, instead of talking about his own exploits.

“I'm lucky to play with one of the best defensemen in the NHL in Devon,” Makar said. It is probably still unknown. But in my eyes, he is such a key player for us. He is a quiet force for us on the blue line. I like his calm, I find him good in all aspects. To me, he's just amazing and he should be among the nominees for the Norris every year.”

The fourth overall pick in the 2017 draft, Makar didn't immediately make the jump to Colorado at the age of 18. He wisely opted for two more seasons at the University of Massachusetts before playing his first game with the Avalanche, on April 15, 2019, in the first round of the playoffs against the Calgary Flames.

< p>“Cale showed great maturity in his decision to wait for the right time to turn pro,” Avalanche coach Jared Bednar said. We had been pulling his ears for some time to see him with us before that. But he chose to return for another year in the NCAA. When he started with us, he felt ready for this new stage. He didn't just want to survive in the NHL, he wanted to be a dominant player.”

“After my first year in Massachusetts, I had discussions with the Avalanche to obtain a first contract, but I felt like I needed time to develop, explained Makar. There were specific areas in my game that I wanted to improve and I felt I could do that by staying in the NCAA. I was also looking to grow as a person, not just as a hockey player. In my eyes, you can never take too much of your time. I'd rather be overprepared than come in quickly and with a little less confidence.”

In only his third full season in the NHL, Makar posted staggering stats for a young defenseman with 86 points (28 goals, 58 assists) and a differential of +48 in just 77 games.