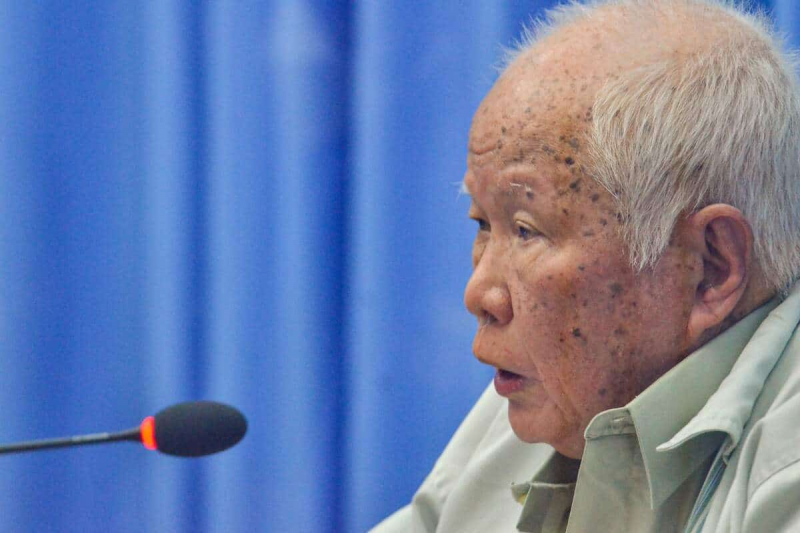 Phnom Penh | The special court charged with judging the Khmer Rouge for their atrocities, for its final decision before dissolution, confirmed on appeal the sentence of life imprisonment for Khieu Samphan, the last dignitary alive, for genocide, Thursday in Phnom Penh.

The 91-year-old former head of state of Democratic Kampuchea was also found guilty of crimes against humanity – murder, enslavement, forced marriages, rape – and serious violations of the Geneva Conventions.

Khieu Samphan “had direct knowledge of the crimes and he shared the intention to commit them with the other participants in the joint criminal enterprise” which killed nearly two million people between 1975 and 1979, said reminded Judge Kong Srim..

The charges against him are associated with “some of the most heinous acts” of the ultra-Maoist dictatorship, insisted the president of the Chamber of the Supreme Court.

Khieu Samphan attended the judgment, at the court, in his wheelchair, listening to the two-and-a-half-hour verdict through headphones.

He was previously sentenced to life in 2014 — verdict upheld on appeal in 2016 — for crimes against humanity committed during the forced evacuation of the inhabitants of Phnom Penh, in the first part of his river trial, started in 2011.

Nearly 500 people, including families of victims, Buddhist monks and diplomats, attended the hearing, a “historic day” according to court spokesman Neth Pheaktra.

“I'm glad to be here to hear the verdict. I demand justice for all the victims because they have suffered so much. The Pol Pot regime was so brutal,” You Soeun, 67, who lost his brother during the Khmer Rouge period, told AFP.

Khieu Samphan, one of the rare public faces of the regime, has always denied his involvement in the acts of which he is accused, in particular in the genocide against the Vietnamese.

“The Chamber of the Supreme Court does not recognize no merit in Khieu Samphan's arguments about the genocide, and reject them,” Kong Srim said.

This count does not relate to the massacres, even mass, of Khmers by Khmers which are not considered by the United Nations to be genocide.

“He said he did not didn't know they were killing people, but he was a head of state, how could he not know? I want to ask him,” Chum Mey, 91, a survivor of S21 prison, told AFP.

Khieu Samphan is the third Khmer Rouge dignitary to be sentenced by this special court, made up of Cambodian and international magistrates.

Kaing Guek Eav, alias Douch, was sentenced to life imprisonment for war crimes and crimes against humanity. The former torturer, head of the country's most fearsome detention center at the time, S21, died in 2020, aged 77.

< p>The judges imposed the same sentence on Nuon Chea, the movement's ideologue, for genocide, against Vietnamese and Cham Muslims, and crimes against humanity. He died in August 2019 at the age of 93.

The Extraordinary Chambers in the Courts of Cambodia (ECCC) are now preparing to close their doors without having dispelled the controversies that have undermined them from the start.

The abandonment in recent years of the proceedings against three accused persons of genocide or crimes against humanity recalled their fragility in a country led by a repentant former Khmer Rouge commander, Hun Sen, who spoke out against any new trial in the name of national stability.

Its cost, more than 330 million dollars, compared to the number of convictions, also fueled suspicions.

But the judges managed to “revitalize the process of national reconciliation”, nuance with the AFP Craig Etcheson, a country expert who testified at one of the trials. Public participation, numerous testimonies… “In sixteen years, there has been enormous progress”, he explains.

His last case closed, the Court must dissolve in three years , after completing its archiving work, among others.