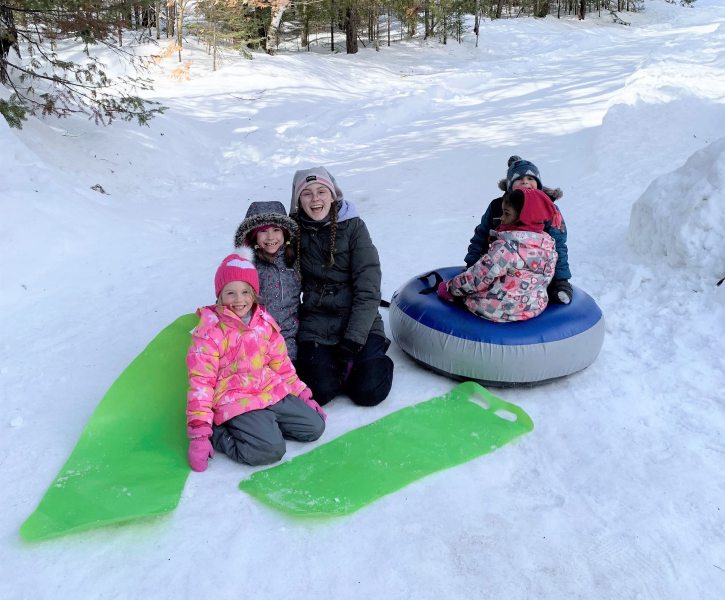 The other day, while I was in Saint-Hippolyte in the Laurentians, I received an email on my phone about Camp Bruchési, a few steps from where I was. Strange coincidence, however.

It was about winter camps for children. I went on the spot to visit the site.

An overview of the site near the lake of the 'Bass.

Almost a century old, Camp Bruchési on the shores of Lac de l'Achigan is a real institution. It was originally founded to help fight tuberculosis in children, the Bruchési Institute recognizing the virtues of the outdoors. as a summer instructor, I was told, under the pseudonym of Goglu during the 90s.

Equipped with dormitories, the main building, where the children will be staying this winter, is getting old, but most of the amenities are there. In the common room, a wood stove surrounded by armchairs provided a gentle warmth. The atmosphere lends itself to relaxation after a day outdoors.

Having already operated during the school break, Camp Bruchési will be open almost all winter.

Having already operated during the school break, Camp Bruchési will be open almost all winter. On the program: snowshoeing, tubing, broomball. There will also be an ice rink, lit in the evening.

Everything is planned so that young people can have fun and get screens, which is not always easy to manage at home. Intended for children, the camps also allow overwhelmed parents to have a little respite.

Day camps are offered several weekends. Those with stays will also take place on certain weekends, but also during the holiday season (excluding Christmas Day, New Year's Day and Eve).

As always, the children will be accompanied by a team of animators. The establishment offers the possibility of support adapted to children with specific needs.

►Alain Demers is the author of the book Rediscovering Quebec: 101 destinations, published by Éditions du Journal.