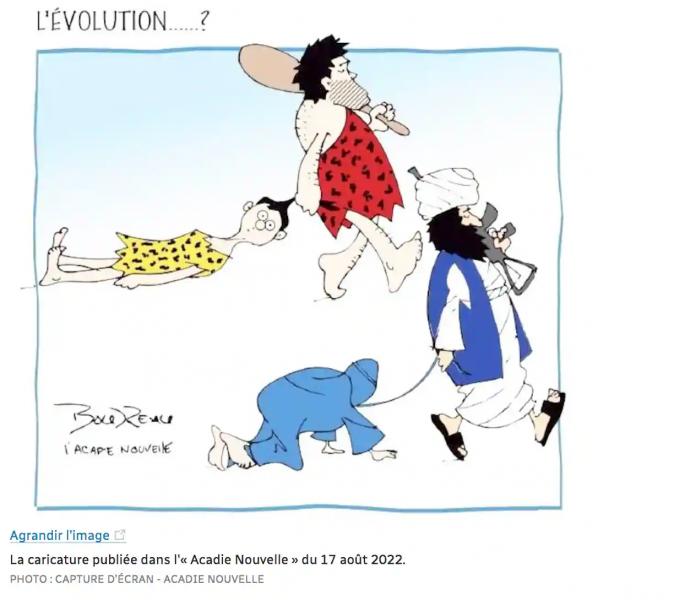 The West is driven mad. We had proof of this last week in New Brunswick.

To mark the first anniversary of the return to power of the Taliban in Afghanistan, the newspaper Acadie Nouvelle published a cartoon comparing these sordid armed religious fundamentalists to cavemen.

Can you believe this cartoon has been called 'Islamophobic'?

Look at this caricature by Marcel Boudreau. Above is a caveman dragging a woman by the hair, while holding a club on his shoulder. And below, we see a Taliban holding a woman wearing a burka on all fours on a leash while carrying an AK47 over her shoulder.

It's funny. Indeed, the Taliban who prevent women from going to school, from leaving their homes, from practicing their profession, it is… prehistoric. Even a 10-year-old child understands the comparison: in 300,000 years, some have not “advanced” much in terms of women's rights.

But for tough activists who don't understand not the sense of what a cartoon is, the thing is scandalous.

Radio-Canada New Brunswick headlined: “A cartoon deemed Islamophobic published in Acadie Nouvelle disturbs” and even published the following warning at the top of its text: “Warning: images or comments published in this article may offend some readers.”

They interviewed two activists who “ask people in Acadia to learn about diversity and ask the media to stop publishing this kind of material”.

Hello! He's not “a Muslim man”, he's a Taliban with a gun on his shoulder. It's not the same thing at all!

In his report, Global News gives the floor to an activist who dares to affirm: “Obviously, the Taliban do horrible things. But there are more productive ways to criticize regimes and ideologies.

Global News interviewed activist Hafsah Mohammad who claimed that “the cartoon treats Muslim women like objects and in a degrading way.” But no, it's the Taliban who are doing this!!!

The New Brunswick Media Coop published an opinion piece with the title: “A caricature of Acadie Nouvelle offensive to Muslims and women”.

Offensive to women? This cartoon ridicules the machos who oppress women! It's a fucking feminist cartoon!

The author of the op-ed asserts that: “The cartoon is filled with colonialist narrative that supports a gender hierarchy and treats racialized people as objects of entertainment that can be ridiculed.”

We are talking here about ridiculing… the Taliban!!!

The radio station CHMA published a report under the headline: “Acadie Nouvelle causes fear of white supremacist violence with its Islamophobic caricature”.

Once again, the world is turned upside down: the Taliban are considered less dangerous than white people who misunderstood a harmless caricature.

Poor Afghan women. Victims of the Taliban and victims of Western blindness.