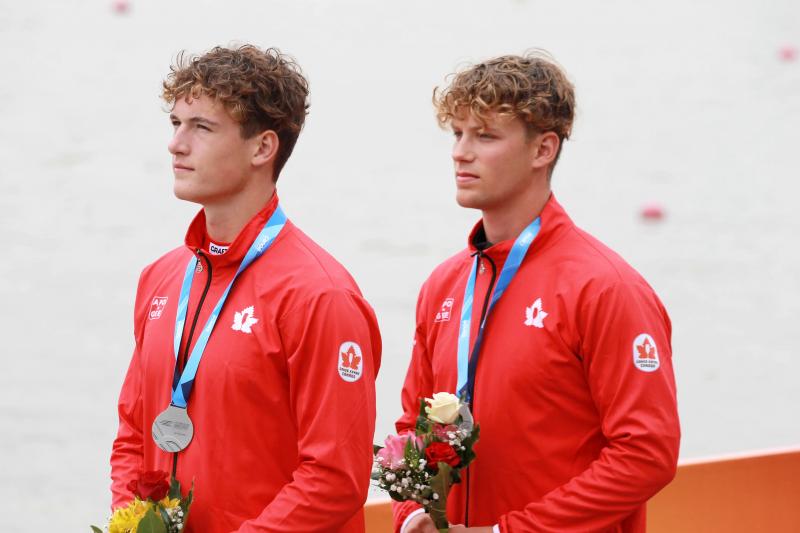 For the first time since 1991, a Canadian pair made it to the C-2 podium at the World Junior Championship. The feat was achieved on Friday in Szeged, Hungary as Viktor Hardy and Zachary Kralik won silver in the C-2 500 m event.

The last podium had been achieved by Attila Buday and Mike Orshack in the C-2 1000 m during the worlds disputed in Vienna 31 years ago. Buday, whose father Tama won two bronze medals at the 1976 Olympic Games in Montreal in the two-seater canoe in the colors of Hungary, took part in three Olympiads with his brother Tama Jr. The family moved to Canada a few years after the Montreal Games.

With a fourth place after the preliminaries, the duo believed in their chances, but they did not necessarily expect to climb on the podium.

“We managed by far the best race of our career, Hardy said. After our fourth place, we knew we could do well, but we are quite surprised with our silver medal. ”

“It’s sick what we just achieved, chasing Hardy. I realize it a little, but I will really realize it after the championships. When I crossed the finish line, I surely screamed. Because the 500 m is an Olympic distance, all the best canoeists were present.

With a time of 1 min 45 43, the Canadians were beaten by Hungarians who were in a class of their own. Ukraine completed the podium.

Coach of the junior national team and present in Hungary, Frédéric Jobin was also surprised Hardy and Kralik's silver medal.

“We hadn't underestimated their potential, but we saw them more between fourth and eighth place,” he said. Their level was very good in C-1 and we were aiming for a place in final A (Top 9). »

“It's not the same thing at all,” said the canoeist from the Lac-Beauport yacht club. The gap between the two is huge. Not everyone was there last year.” he silver will make Canoe Kayak Canada (CKC) leaders' eyes widen.

“ After our race, we thought a lot that this medal could open doors for us. It gives us hope for the future. We hope to be able to continue training together. CKC discovered us. They are surprised by our podium, but also very proud.”

Along with Peter Bradley and Austin Pigeon, Hardy and Kralik will be back in action on Saturday for the C-4 final 500 m.

“We are three out of four left-handers and that will make our job a lot more difficult, he explained, but it is possible to do well. I think we can surprise. »

In the U 23, Alix Plomteux, from the Lac-Beauport club, and his partner Tyler Laidlaw finished in eighth place in the same ordeal.